Oscar II (21 January 1829 – 8 December 1907), baptised Oscar Fredrik, was King of Sweden from 1872 until his death and King of Norway from 1872 until 1905. The third son of King Oscar I of Sweden and Josephine of Leuchtenberg, he was a descendant of Gustav I of Sweden through his mother.

When he was born on January 21, 1829 in Stockholm, Oscar Fredrik was created Duke of Östergötland. He entered the navy at the age of eleven, and was appointed junior lieutenant in July 1845. Later he studied at Uppsala University, where he distinguished himself in mathematics. On 13 December 1848, he was made an honorary member of the Royal Swedish Academy of Sciences.

From 1859, when his father died, he was first in line to the Swedish throne after his oldest brother King Charles, who then had no male heirs (his son had died in infancy in 1854). His middle brother Gustaf had died in 1852.

King of Sweden and Norway 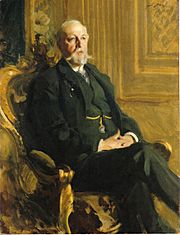 He succeeded his brother Charles XV and IV on 18 September 1872, and was crowned as king of Norway in the Nidaros Cathedral in Trondheim on 18 July 1873. At the accession he adopted as his motto Brödrafolkens väl / Broderfolkenes Vel ("The Welfare of the Brother Peoples"). While the King and the Royal Court resided mostly in Sweden, Oscar made the effort of learning to be fluent in Norwegian and from the very beginning he realized the essential difficulties in the maintenance of the union between the two countries.

The political events which led up to the peaceful dissolution of the union between Norway and Sweden in 1905 could hardly have been attained but for the tact and patience of the king himself. He was dethroned on 7 June 1905 by the Norwegian Parliament and renounced the Norwegian throne on 26 October.

His health declined, indeed, to permit any prince of his house to become king of Norway, but better relations between the two countries were restored before his death in Stockholm on 8 December 1907 from unknown causes.

All content from Kiddle encyclopedia articles (including the article images and facts) can be freely used under Attribution-ShareAlike license, unless stated otherwise. Cite this article:
Oscar II of Sweden Facts for Kids. Kiddle Encyclopedia.