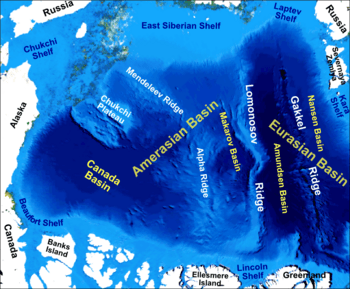 The Gakkel Ridge (formerly known as the Nansen Cordillera and Arctic Mid-Ocean Ridge) is a mid-oceanic ridge. It is located in the Arctic Ocean between Greenland and Siberia. It is a divergent tectonic plate boundary between the North American Plate and the Eurasian Plate. It is 1,800 kilometres (1,100 mi) in length. Geologically, it connects the northern end of the Mid-Atlantic Ridge with the Laptev Sea Rift.

The existence and approximate location of the Gakkel Ridge were predicted by Soviet polar explorer Yakov Yakovlevich Gakkel. It was confirmed on Soviet expeditions in the Arctic around 1950. The ridge is named after him. The name was recognized in April 1987 by SCUFN (under that body's old name, the Sub-Committee on Geographical Names and Nomenclature of Ocean Bottom Features).

All content from Kiddle encyclopedia articles (including the article images and facts) can be freely used under Attribution-ShareAlike license, unless stated otherwise. Cite this article:
Gakkel Ridge Facts for Kids. Kiddle Encyclopedia.