Nils Adolf Erik Nordenskiöld (18 November 1832, Helsinki, Finland – 12 August 1901, Dalbyö in Södermanland, Sweden) was a Finland-Swedish aristocrat, geologist, mineralogist and Arctic explorer. He was a member of the prominent Finland-Swedish Nordenskiöld family of scientists and held the title of a friherre (baron).

Born in the Grand Duchy of Finland at the time it was a part of the Russian Empire, he was later, due to his political activity, forced to move to Sweden, where he later became a member of the Parliament of Sweden and of the Swedish Academy. He led the Vega Expedition along the northern coast of Eurasia in 1878–1879. This was the first complete crossing of the Northeast Passage. Initially a troubled enterprise, the successful expedition is considered to be among the highest achievements in the history of Swedish science. 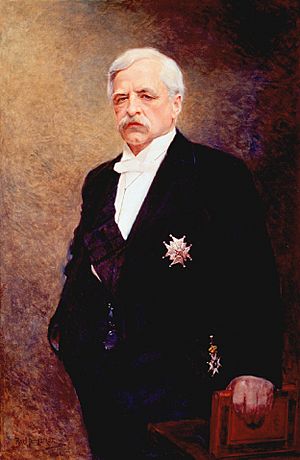 The Nordenskiölds were an old Finno-Swedish family, and members of the nobility. Nordenskiöld's father, Nils Gustaf Nordenskiöld, was a prominent Finnish mineralogist, civil servant and traveller. He was also a member of the Russian Academy of Sciences.

Nordenskiöld was born in 1832 in Helsinki, the capital of Finland, but he spent his early youth on the family estate in Mäntsälä. He went to school in Porvoo, a small town on the south coast of Finland. He then entered the Imperial Alexander University in Helsinki in 1849 where he studied mathematics, geology, and applied himself especially to chemistry and mineralogy. He received his master's degree in 1853. Two years later he published his doctoral dissertation, entitled "Om grafitens och chondroditens kristallformer" ("On the crystal forms of graphite and chondrodite").

Upon his graduation, in 1853, Nordenskiöld accompanied his father to the Ural Mountains and studied the iron and copper mines at Tagilsk; on his return he received minor appointments both at the university and the mining office.

Having studied under Runeberg he belonged to Liberal, anti-tsarist circles that agitated for Finland's liberation from Russia by the Swedes during the Crimean War; and an unguarded speech at a convivial entertainment in 1855 drew the attention of the Imperial Russian authorities to his political views, and led to a dismissal from the university.

He then visited Berlin, continuing his mineralogical studies, and in 1856 obtained a travelling stipend from the university in Helsinki and planned to expend it in geological research in Siberia and Kamchatka. In 1856, Nordenskiöld was also appointed Docent in Mineralogy at the university. In 1857 he aroused the suspicion of the authorities again, so that he was forced to leave Finland, practically as a political refugee, and was deprived of the right of ever holding office in the university of Finland. He fled to Sweden.

In 1863 he married Anna Maria Mannerheim, the aunt of Carl Gustaf Emil Mannerheim.

Settling in Stockholm, and Arctic exploration 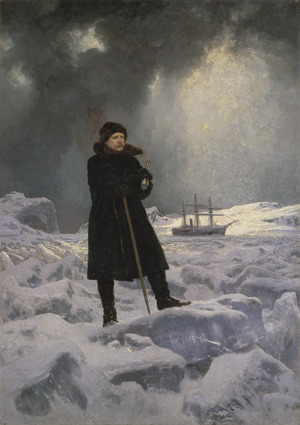 Nordenskiöld settled in Stockholm, and soon he received an offer from Otto Torell, a geologist, to accompany him on an expedition to Spitsbergen. To the observations of Torell on glacial phenomena Nordenskiöld added the discovery at Bell Sound of remains of Tertiary plants, and on the return of the expedition he received the appointment of a curator and Director of the Mineralogical Department of the Swedish Museum of Natural History (Naturhistoriska Riksmuseet) and a professorship in Mineralogy at the Swedish Academy of Sciences. He was also awarded the 1869 Royal Geographical Society's Founder's Gold Medal.

Nordenskiöld's participation in three geological expeditions to Spitsbergen, followed by longer Arctic explorations in 1867, 1870, 1872 and 1875, led him to attempt the discovery of the long-sought Northeast Passage. This he accomplished in the voyage of the SS Vega, navigating for the first time the northern coasts of Europe and Asia. Starting from Karlskrona on 22 June 1878, the Vega doubled Cape Chelyuskin in the following August, and after being frozen in at the end of September near the Bering Strait, completed the voyage successfully in the following summer. He edited a monumental record of the expedition in five volumes, and himself wrote a more popular summary in two volumes.

On his return to Sweden he received an enthusiastic welcome, and in April 1880 was made a baron and a commander of the Order of the North Star.

In 1883, he visited the east coast of Greenland for the second time, and succeeded in taking his ship through the great ice barrier, a feat attempted in vain during more than three centuries. The captain on the Vega expedition, Louis Palander, was made a nobleman at the same time, and took the name Palander af Vega.

In 1893, Nordenskiöld was elected to the 12th chair of the Swedish Academy.

In 1900 he received the Murchison Medal from the Geological Society of London. He was nominated for the first Nobel Prize in Physics. but died in 1901 before the prizes were awarded.

A historian of early cartography

As an explorer, Nordenskiöld was naturally interested in the history of Arctic exploration, especially as evidenced in old maps. This interest in turn led him to collect and systematically study early maps. He is today remembered for two substantial monographs, which both included many facsimiles, on early printed atlases and geographical mapping and medieval marine charts, respectively the Facsimile-Atlas to the Early History of Cartography (1889) and Periplus (1897).

He left his huge personal collection of early maps to the University of Helsinki, and it was inscribed on UNESCO's Memory of the World Register in 1997.

This author is usually abbreviated Nordensk. when citing a botanical name.

All content from Kiddle encyclopedia articles (including the article images and facts) can be freely used under Attribution-ShareAlike license, unless stated otherwise. Cite this article:
Adolf Erik Nordenskiöld Facts for Kids. Kiddle Encyclopedia.