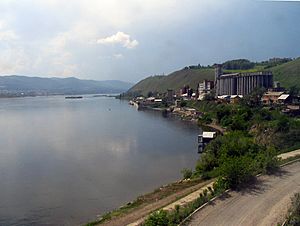 Yenisei River – As seen from the Trans-Siberian Railway near Krasnoyarsk

The Yenisei (Енисе́й) is a river in Siberia. It belongs to the greatest river system that flows into the Arctic Ocean. The Yenisei is the fifth-longest river in the world. It is a little shorter than the Mississippi River, but with 1.5 times the flow. It comes from Mongolia and follows a northern course to the Kara Sea. The river drains a large part of central Siberia. The longest stream following the Yenisei-Angara-Selenga-Ider is about 5539 km long. Its watershed, which includes the world's largest (by volume) lake, Lake Baikal, holds more water than any other river system.

The upper parts of the system have rapids and flooding, and pass through areas where very few people live. The middle section is controlled by a series of large hydroelectric dams. The dams were built to supply a major Russian primary industry. Partly built by gulag labor in Soviet times, industrial contamination is a big problem in the area. The area is very hard for the police to watch. Moving on through sparsely populated taiga, the Yenisei grows with many tributaries and finally reaches the Kara Sea in desolate tundra where it is covered with ice for more than half the year. As with other Siberian rivers, the flow has increased lately. People think this is because of global warming. A concern was also raised that a change in the salt in the Arctic may have a global impact on ocean currents.

All content from Kiddle encyclopedia articles (including the article images and facts) can be freely used under Attribution-ShareAlike license, unless stated otherwise. Cite this article:
Yenisei Facts for Kids. Kiddle Encyclopedia.