Born in Hasselt in eastern Belgium as the son of an army officer, de Gerlache was educated in Brussels. From a young age he was deeply attracted by the sea, and made three voyages in 1883 and 1884 to the United States as a cabin boy on an ocean liner. He studied Engineering at the Free University of Brussels. After finishing his third year in 1885, he quit the university and joined the Belgian Navy on 19 January 1886.

After graduating from the nautical college of Ostend he worked on fishery protection vessels as second and third lieutenant. In October 1887 he signed on as seaman on the Craigie Burn, an English ship, for a voyage to San Francisco, but the ship failed to round Cape Horn and was sold for scrap in Montevideo. He returned to Europe after spending time in Uruguay and Argentina. After a trip to Constantinople and the Black Sea he worked for the Holland-America Line as fourth officer, before obtaining an appointment as lieutenant in the Belgian Navy. Until July 1894 he was an officer on Ostend-Dover ferries, meanwhile taking courses and becoming a captain on 22 August 1894.

Frustrated by the monotonous work aboard the Ostend-Dover ferries, de Gerlache offered his services to Belgian King Leopold II and Welsh-American adventurer Henry Morton Stanley, for an expedition to the Congo, but the offer was turned down. A letter to polar explorer Otto Nordenskiöld went unanswered. Finally he started planning and promoting his own Antarctic expedition, proposing his plan in 1894 to the Belgian Royal Geographical Society.

In 1896, de Gerlache purchased the Norwegian-built whaling ship Patria, which he extensively refitted and renamed Belgica. With a multinational crew including Roald Amundsen, Frederick Cook, Antoni Bolesław Dobrowolski, Henryk Arctowski and Emil Racoviță, he set sail from Antwerp on 16 August 1897.

The Belgica reached the coast of Graham Land on the Antarctic Peninsula in January 1898. Sailing between the Graham Land coast and a string of islands to the west, de Gerlache named the passage Belgica Strait. This strait was later renamed Gerlache Strait in his honour. After charting and naming several islands during some 20 separate landings, they crossed the Antarctic Circle on 15 February 1898. 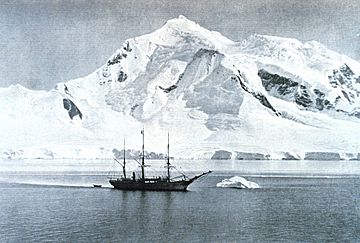 The Belgica anchored near Mount William

On 28 February 1898, de Gerlache's expedition became trapped in the ice of the Bellinghausen Sea, near Peter I Island. Despite their efforts, they quickly realised that they would be forced to spend the winter on Antarctica. Total darkness set in on 17 May, lasting until 23 July. Another seven months of hardship followed as the crew laboured to free the vessel from the ice. Several men lost their sanity, including one Belgian sailor who left the ship "announcing he was going back to Belgium". The party also suffered from scurvy.

On 15 February 1899 the vessel was able to begin moving through the channel that the crew had cleared. It took them nearly a month to cover 7 miles, and on 14 March they cleared the ice. The expedition returned to Antwerp on 5 November 1899. In 1902, de Gerlache's book Quinze Mois dans l'Antarctique ('Fifteen Months in Antarctica'), published in 1901, was awarded a prize by the Académie française.

The fungi collected during the expedition were described in a paper published in 1905 by Marietta Hanson Rousseau and Elisa Caroline Bommer.

de Gerlache participated in several other expeditions, including:

He had two children with his first wife, Suzanne Poulet, whom he married in 1904: Philippe (born 1906) and Marie-Louise (born 1908). After this marriage ended in 1913, de Gerlache married Elisabeth Höjer from Sweden. With her, he had another son, the explorer Gaston de Gerlache in 1919. In the 1950s, Gaston followed in his father's footsteps, participating in a Belgian research station in Antarctica.

All content from Kiddle encyclopedia articles (including the article images and facts) can be freely used under Attribution-ShareAlike license, unless stated otherwise. Cite this article:
Adrien de Gerlache Facts for Kids. Kiddle Encyclopedia.