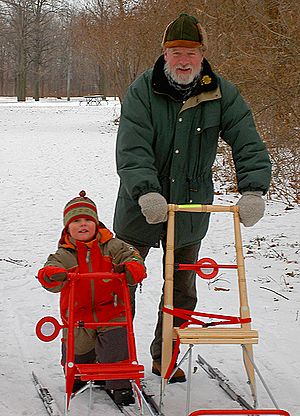 The kicksled or spark is a small sled consisting of a chair mounted on a pair of flexible metal runners that extend backward to about twice the chair's length. The sled is propelled by kicking the ground by foot. There is a handlebar attached to the top of the chair back. "Kicksled" is a direct translation of the Finnish word "potkukelkka". Some other possible translations are "kicker" and "chair-sled". 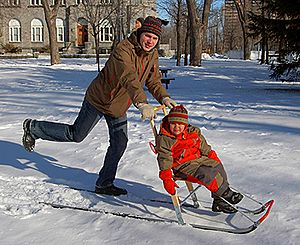 A kicksled is designed to be used on hard, slippery surfaces like ice or hardpacked snow. To kicksled in deeper, more powdery snow, extra-wide plastic snow runners are attached to the standard, thin runners of the sled. On very smooth, bare ice, the use of traction devices like spiked shoes can improve kicking force.

The kicksled is in common use in Sweden, Norway and Finland, especially where roads are not sanded or salted. It is also an excellent means of travelling over frozen lakes to go ice fishing or just to explore the lake. Kicksledding on lake ice shares many of the same features as tour skating. 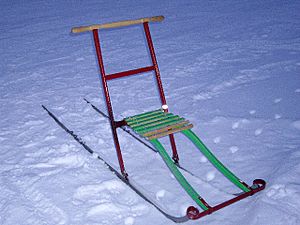 The first definite record of a kicksled was in a newspaper in northern Sweden around 1870. The kicksleds of that era had stiff wooden runners and were heavy. In 1909 the design of the modern kicksled with flexible metal runners was introduced by the Swedish factory Orsasparken, which quickly became standard in Sweden, Finland and Norway. 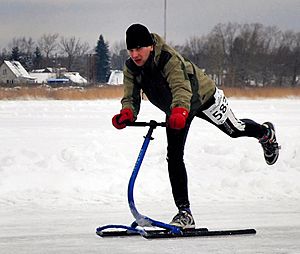 Around 1990 kicksled racing was revived as a serious sport in Finland. There are races of up to 100 kilometres (62 mi) long and the average speed is around 30 km/h (19 mph). Norways's Geilo Ski Resort boasts an annual Kicksled World Championship every January.

In Canada, the kick sled has been modified for dog sports. A bridle is attached to the kick sled, and a gangline to that, with one to three dogs pulling.

All content from Kiddle encyclopedia articles (including the article images and facts) can be freely used under Attribution-ShareAlike license, unless stated otherwise. Cite this article:
Kicksled Facts for Kids. Kiddle Encyclopedia.