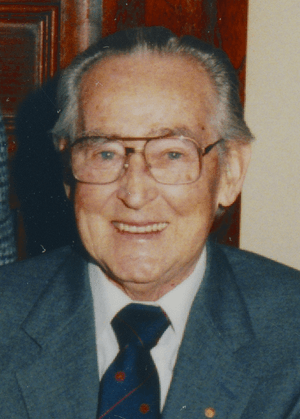 Colin Milton Thiele AC (16 November 1920 – 4 September 2006) was an Australian author and educator. He had over 100 published works. He was known for his children's books. His most famous works were Storm Boy, Blue Fin, the Sun on the Stubble series and February Dragon. Storm Boy was made into movie twice, the first in 1976 and the second in 2019. In 1976, he was made a Companion of the Order of Australia for his work in writing and teaching.

Thiele was born in Eudunda, South Australia. At the start of his life, he only spoke German as part of the German community in the Barossa Valley. He served in the Royal Australian Air Force (RAAF) during the Second World War. He was married to Rhonda. The couple had two daughters.

Thiele died of heart failure on 4 September 2006 in Brisbane, Queensland. He was 85. There was not many news reports of his death. This was because it happened on the same day as fellow Australian, zookeeper and conservationist, Steve Irwin.

All content from Kiddle encyclopedia articles (including the article images and facts) can be freely used under Attribution-ShareAlike license, unless stated otherwise. Cite this article:
Colin Thiele Facts for Kids. Kiddle Encyclopedia.