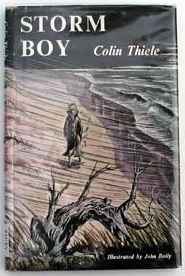 Storm Boy is a 1964 Australian children's book, written by Colin Thiele, about a boy and his pelican. The book concentrates on the relationships the boy has with his father Hide-Away Tom, the pelican, and an outcast Australian Aboriginal man called Fingerbone.

The story has been dramatised several times. The film adaptation Storm Boy won the Jury and Best Film prizes at the 1977 AFI Awards.

Storm Boy likes to wander alone along the fierce deserted coast among the dunes that face out into the Southern Ocean. After a pelican mother is shot, Storm Boy rescues the three baby pelicans and nurses them back to health. He names them Mr. Proud, Mr. Ponder and Mr. Percival. After he releases them, his favourite, Mr Percival, returns. The story then concentrates on the conflict between his lifestyle, the externally imposed requirement for him to attend a school, and the fate of the pelican.

The 1976 film adaptation Storm Boy won both the Jury Prize and Best Film at the 1977 Australian Film Institute Awards. The film starred David Gulpilil in the role of Finger Bone and Greg Rowe in the title role. The film was advertised with the tagline "Every year has its special film, this year it's...Storm Boy".

An audio dramatisation was made in 1994. The Bell Shakespeare Company toured Australia with the play of Storm Boy in 1996, with Trent Atkinson in the title role.

A children's video game by the name of Storm Boy: The Game, following the story and including a few mini games based on its events, was developed by Blowfish Games and released in late 2018 on the PC, PS4, Xbox One, Android and Nintendo Switch.

All content from Kiddle encyclopedia articles (including the article images and facts) can be freely used under Attribution-ShareAlike license, unless stated otherwise. Cite this article:
Storm Boy (novel) Facts for Kids. Kiddle Encyclopedia.