Eudunda is a rural town in South Australia, roughly 103 kilometres northeast of Adelaide, established in 1870 after settlers began moving into the area in the 1860s. As of the 2006 census, Eudunda had a population of 640.

The earliest European activity in the district was overlanding, centred on Narcoota and the Narcoota Track in the late 1830s. Pastoralism soon followed, with expansive 'runs' being taken up for sheep grazing by men such as Lachlan McBean, Frederick Hansborough Dutton, and William Russell. Several decades then passed before closer settlement began. The founder of Eudunda was John Henry Hannan, who owned the land that was surveyed and divided for sale.

The town landscape has changed a little from the Edwardian era - with the "Gunn Street Extension" pushing the main road from the Top Pub on Gunn Street straight through what used to be railway land toward Bruce Street and the centre of the town. The new road has further enhanced the town gardens, seen on the drive into the main centre.

Eudunda was the birthplace of world-renowned author Colin Thiele, whose bronzed sculpture (by Chris Radford) is in the Centenary Gardens. The gardens also contain stone walls and tiled art featuring a Century of Transport.

The historic former Appelt's Store on South Terrace is listed on the South Australian Heritage Register.

Eudunda was once a station on the Morgan railway line from 1878 until it closed. From 1914, it was the junction station for a branch running north past Point Pass to Robertstown. It is on the Thiele Highway, and is the junction to the Worlds End Highway leading north through Robertstown towards Burra and state route B84 (Curio Road) leading west through Auburn and Balaklava to Port Wakefield. 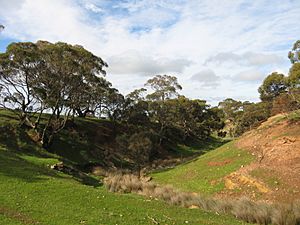 Narcoota and associated Narcoota Springs, lie in a valleyin the south of the Eudunda locality near Neales Flat. The area featured prominently in the pioneering history of South Australia.

Narcoota, an indigenous name for the area, is of obscure meaning. It may be a corruption of ‘Narcoona’ – seeing – in reference to being a lookout over the Murray Plains. European settlers adopted it from the outset, although it was variously spelt at first (examples are Nancoota, Tharcoota, and Nicota).

Narcoota Springs was a bustling stopover and watering place for the earliest explorers and pioneering overlanders, being a rare source of permanent water at the brink of the waterless Murray Plains. It was at the western end of the Narcoota Track, which from 1838 to 1842 was part of the main (and first) road between the Murray River and Adelaide. At the eastern end was The Pound, 9 km north of Blanchetown, which years later became named McBean Pound at Roonka Station. The overland road diverged at the Pound – one track went south toward Mount Barker and the other west to Narcoota, then on to Gawler Town and Adelaide.

Apart from overlanding parties droving large mobs of livestock from New South Wales, Narcoota Springs had some distinguished visitors in its heyday. They included Governor George Gawler and explorer Charles Sturt, as well as Henry Inman, Commander of Police, who passed through there at least five times.

The first was in 1839 when Inman led a police party to the Weston Flat district to investigate conflict resulting in the death of one over-lander and an unknown number of Aboriginals. Months later he was back again when he took part in the exploration expedition of Governor Gawler from North West Bend to Mount Bryan.

In 1841 Inman was there again after his own over-landing party was attacked near Chowilla, losing 5,000 sheep. He again camped there as part of the 68-man police party led by Commissioner of Police Thomas Shuldham O'Halloran, sent by Governor George Grey to protect other over-landers at the Rufus River.

After a settlement was established in late 1841 by Edward John Eyre at Moorundie (8 km below Blanchetown, South Australia), the overland route then shifted further south, roughly following the present Sturt Highway between Blanchetown and Truro. The Narcoota Track became disused thereafter.

Later in the 1840s a pastoral property named Narcoota Station was established. Nearby is Mount Rufus, where gold was discovered in 1868, but without much result. With closer settlement in the latter part of the 1800s, many grain farmers moved into the district, such that by 1900 there were busy schools and churches. Over a century later many stone ruins attest to the failure of close settlement, but those pioneering foundations produced the farms and grazing properties which thrive there today.

Geologically, the beds outcropping along Narcoota Creek are so typical in structure and stratigraphy of geological features occurring in several locations throughout the North Mount Lofty Ranges, that the name Narcoota Series has been adopted for the entire group.

All content from Kiddle encyclopedia articles (including the article images and facts) can be freely used under Attribution-ShareAlike license, unless stated otherwise. Cite this article:
Eudunda Facts for Kids. Kiddle Encyclopedia.