Dutton is a settlement in South Australia. The small township lies approximately 6 km north of Truro on the Eudunda Road. It was first laid out in 1866 and lots were advertised for sale in the German-language newspaper Südaustralische Zeitung on October 10, 1866. It was named "Dutton" in honour of Francis Dutton, the seventh Premier of South Australia. The township originally had two churches. St John's Lutheran Church was built in 1871 and originally served other Christian denominations also. Services are still held there regularly. A Congregational Church was built in 1879. This closed in 1958 and is now a private home.

The historic former St John's Lutheran Manse and Blacksmith's Shop and Dwelling are listed on the South Australian Heritage Register. 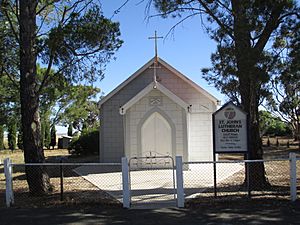 All content from Kiddle encyclopedia articles (including the article images and facts) can be freely used under Attribution-ShareAlike license, unless stated otherwise. Cite this article:
Dutton, South Australia Facts for Kids. Kiddle Encyclopedia.