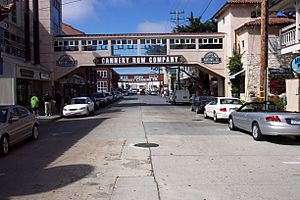 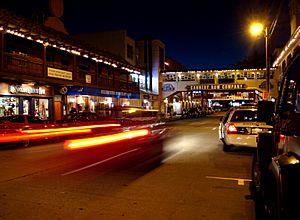 Cannery Row is the waterfront street bordering the city of Pacific Grove, but officially in the New Monterey section of Monterey, California. It was the site of a number of now-defunct sardine canning factories. The last cannery closed in 1973. The street name, formerly a nickname for Ocean View Avenue, became official in January 1958 to honor John Steinbeck and his well-known novel Cannery Row. In the novel's opening sentence, Steinbeck described the street as "a poem, a stink, a grating noise, a quality of light, a tone, a habit, a nostalgia, a dream."

Cannery Row was the setting of John Steinbeck's novels Cannery Row (1945) and Sweet Thursday (1954). Both were the basis for the 1982 movie Cannery Row, starring Nick Nolte and Debra Winger. It is also mentioned in Bob Dylan's song "Sad Eyed Lady of the Lowlands". Pacific Biological Laboratories, a biological supply house, was located at 800 Ocean View Avenue (now 800 Cannery Row) from 1928 to 1948, and operated by Edward F. Ricketts, who was the inspiration for several characters in Steinbeck novels. The laboratory is still preserved. Across from the laboratory still exists a Chinese-American-owned store mentioned in both Cannery Row and Sweet Thursday, as well as a vacant lot that was the "home" of some of the homeless characters in the novel. At 851 Cannery Row, across from Pacific Biological Laboratories, is the original building that inspired the bar from the novel named La Ida Cafe.[1] 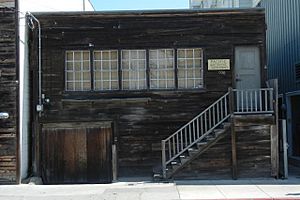 The Pacific Biological Laboratories of Ed Ricketts on Cannery Row

Cannery Row was adjoined by a grand mansion owned by Montana mining tycoon James A. Murray. Known as "Casa de las Olas" or the Murray Hacienda, the mansion was demolished in the 1940s to make way for the expansion of more canneries. A historical marker is located on the site of the former mansion. The canneries failed after the collapse of the fishing industry in Monterey Bay in the mid-1950s, which resulted from a combination of factors, including unfavorable oceanic conditions, over-fishing, and competition from other species. In his investigation of where the sardines had gone, Ed Ricketts finally concluded "They're in cans." Before the collapse, the fishery was one of the most productive in the world due to the upwelling of cold yet nutrient-rich water along the California coastline. 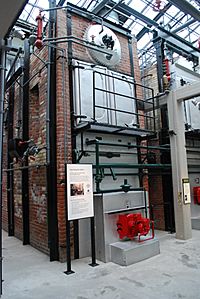 Cannery Row itself is now a tourist attraction with many restaurants and hotels, several of which are located in former cannery buildings, and a few historic attractions. Some privately owned fishing companies still exist on Cannery Row, housed on piers located a short distance from the historic district frequented by tourists.

In recent years, Cannery Row has become increasingly popular among sport fishermen due to extensive public fishing facilities. MacAbee Beach and San Carlos Beach, which bookend Cannery Row are both popular spots for kayak-launching; San Carlos Beach is one of Monterey Bay's most popular scuba-diving spots. 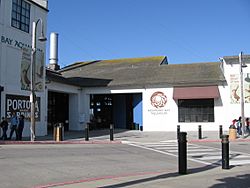 Front entrance of the Aquarium

The Monterey Bay Aquarium (opened in 1984) is located at the north end of Cannery Row, at the former site of the major Hovden Cannery. Norwegian immigrant Knut Hovden founded Hovden Food Products Corporation which opened on July 7, 1916. By canning squid at the end of its life, Hovden Cannery managed to outlast its neighbors, finally closing its doors in 1973 when it became the last cannery on the row to close.

All content from Kiddle encyclopedia articles (including the article images and facts) can be freely used under Attribution-ShareAlike license, unless stated otherwise. Cite this article:
Cannery Row Facts for Kids. Kiddle Encyclopedia.