An open sandwich, also known as an open-face/open-faced sandwich, bread baser, bread platter or tartine, consists of a slice of bread or toast with one or more food items on top.

During the start of the middle ages, thin slabs of coarse bread called "trenches" (late 15th century English) or, in its French derivative, "trenchers", were used as plates. At the end of the meal, the food-soaked trencher was eaten by the diner (from which we get the expression "trencherman"), or perhaps fed to a dog or saved for beggars. Trenchers were as much the harbingers of open-face sandwiches as they were of disposable crockery.

A direct precursor to the English sandwich may be found in the Netherlands of the 17th century, where the naturalist John Ray observed that in the taverns beef hung from the rafters "which they cut into thin slices and eat with bread and butter laying the slices upon the butter". These explanatory specifications reveal the Dutch belegd broodje, open-faced sandwich, was as yet unfamiliar in England.

Open sandwiches are sandwiches that are made with only a single slice of bread. It has given rise to some controversy in the philosophy of language study of meaning underdetermination after a judge had to consider whether a burrito was a sandwich for the purposes of enforcing an exclusive use clause in an American legal case. The judge followed the definition of Merriam Webster's Dictionary: "two thin pieces of bread, usually buttered, with a thin layer (as of meat, cheese or savory mixture) spread between them". Because the burrito was "typically made with a single tortilla", the judge said it was not a sandwich.

This decision led Amanda Hess to question whether an open-faced sandwich was a sandwich at all. She questioned whether pizza, bruschetta, buttered toast or hot dogs could be considered sandwiches. She found that the United States Department of Agriculture defined a sandwich as "at least 35% cooked meat and no more than 50% bread". Further the USDA regulations only apply to open-faced sandwiches. Sandwiches made with two slices of bread are covered by the Food and Drug Administration.

Responding to the controversy Dan Pashman declared that "a burrito is not a sandwich". He stated that a sandwich must be composed of a filling between two discrete items of food, and that one must be able to eat it without utensils.

Open sandwiches allow for an arrangement of different types of sandwiches to be served with afternoon teas or as an accompaniment to salads. They can be cut into fancy shapes of triangles, stars, rounds and crescents, and arranged in an attractive platter for presentation. Common ingredients for open sandwiches are jam, stuffed olives, chopped herbs, cream cheese, hard-boiled eggs and pimiento. Any ingredients can be used to add flavor and color to enhance the presentation of the sandwich platter. 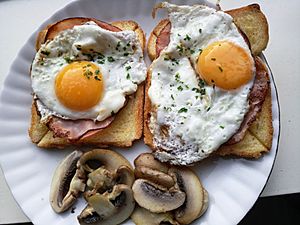 A Dutch ham and egg open sandwich with sliced mushroom

Open sandwiches like this are consumed in France, Belgium, Denmark, Norway, Sweden, Finland, Estonia, Austria and Germany, the Czech Republic, Hungary, the Netherlands, Poland as well as other parts of Europe, and North America as a regular breakfast and supper food item. The American tongue toast is offered as an entrée for breakfast, lunch, and supper and as an hors d'œuvre for formal parties.

Open sandwich is the common, traditional sandwich type in the Nordic countries, Estonia, Latvia, Lithuania, the Netherlands, Belarus, Russia, Poland, Ukraine, where it is typically eaten at breakfast, lunch, supper, or as a snack. In Finland the sandwich is called voileipä, and in Estonia similarly võileib, which also means "butter bread". 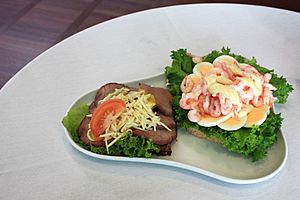 A condiment, such as mayonnaise, or mayonnaise-based dressing is also often included in some form. An old traditional replacement for butter on a piece of bread with herring is pig fat. There are many variations associated with the smørrebrød/smørbrød/smörgås and there are even special stores, cafés and restaurants (especially in Denmark) that specialize in them.

The Dutch and Flemish Uitsmijter consists of one or more slices of bread topped with fried eggs (one per slice of bread), and can be accompanied by slices of cheese and/or meat (roast beef or ham). The dish is often served as a hearty breakfast. Sweet toppings are commonly used for breakfast in the Netherlands and Belgium: e.g. sprinkles, vlokken, or muisjes, next to the more widespread peanut butter, honey, jam, and chocolate spread.

In North America an open faced sandwich may also refer to a slice of bread topped with warm slices of roasted meat and gravy. Examples include a beef Manhattan, a hot chicken sandwich in Canada, or Welsh rarebit. This is also done in Scandinavian countries, where they also eat open faced sandwiches with fried meat and fried fish.

All content from Kiddle encyclopedia articles (including the article images and facts) can be freely used under Attribution-ShareAlike license, unless stated otherwise. Cite this article:
Open sandwich Facts for Kids. Kiddle Encyclopedia.