A chicken sandwich is a sandwich that typically consists of boneless, skinless chicken breast served between slices of bread, on a bun, or on a roll. Variations on the "chicken sandwich" include the chicken burger or chicken on a bun, hot chicken, and chicken salad sandwich.

In North America, the sandwich usually consists of a chicken filet or patty, toppings and bread. The chicken meat can be deep fried, grilled, roasted or boiled, served hot or cold, and white or dark meat chicken can be used. Shredded chicken in one form or another, such as chicken salad, can also be used in chicken sandwiches. Another form is made with cold cuts. Wrap versions of the sandwich can also be made, in which the ingredients are rolled up inside a flatbread, such as a tortilla. Open-faced versions of the sandwich, which feature hot chicken served with gravy on top of bread, are also common variations. 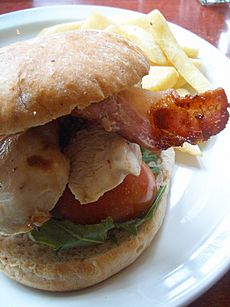 A chicken burger with bacon in Scotland

Some establishments serving hamburgers also serve chicken sandwiches, giving customers an alternative to beef. Such a sandwich may also be called "chicken on a bun" or "chicken burger" in many countries, and is served on a hamburger bun with similar condiments and toppings as found on hamburgers. While most chicken sandwiches in this context usually use fried or grilled chicken breasts, a chicken burger may also be made of a grilled or fried patty of ground chicken. 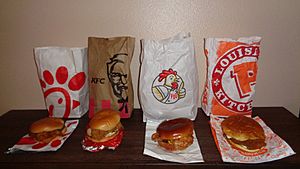 Chicken salad served between slices of bread is a chicken sandwich variation seen both in North America and elsewhere.

In Ireland, the popular chicken fillet roll is a baguette filled with a spicy or plain Southern-fried breaded chicken fillet and a mayonnaise and/or butter spread. 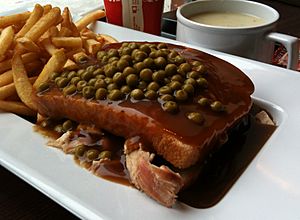 The hot chicken sandwich or simply "hot chicken" (Quebec French: sandwich chaud au poulet) is a type of chicken sandwich consisting of chicken, sliced bread, and gravy (which is generally poutine sauce). The sandwich is usually served with green peas and commonly found in Eastern Canadian cuisine. It's especially popular in Quebec and is often considered one of the province's staple dishes. Since it is so commonly found in eateries of Quebec (Rôtisserie St-Hubert, Valentine, e.g.) and less seen outside the province, many Québécois regard it as a part of Quebec cuisine and believe it to have originated in the province. This combination of chicken, gravy, and peas is known by its own term: galvaude, seen in poutine galvaude.

Although less featured in other areas of North America, the sandwich is also found in small diners from the Canadian Maritimes and throughout the Southeastern United States.

The sandwich was a working-class dish already common and well established in North American cuisine by the early 1900s and featured on the food menus of pharmacists and druggists of the time. Due to its ease of preparation and its minimal costs, the sandwich was also widely served in the mess halls and cafeterias of the mid-1900s.

This style of sandwich often makes use of leftovers from a previous meal. Substituting turkey for the chicken would make a hot turkey sandwich and substituting roast beef makes a variety of the roast beef sandwich. 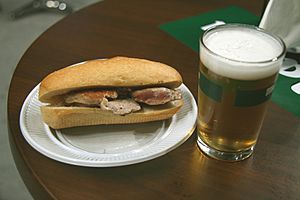 A pepito prepared with chicken meat

The pepito is a sandwich that is prepared with chicken or beef, beans or refried beans and a roll or bun as primary ingredients. It is a common street food in Mexico and Venezuela.

Found in Ohio is the shredded chicken sandwich. The sandwich is also referred to as a hot chicken sandwich in rural Ohio. The sandwich consists of shredded chicken, one or more types of condensed soup, seasoning and crushed crackers to help thicken and bind the sauce. This dish can be heated on a stove top or slow cooker. Invented as a way to use leftover chicken, these sandwiches became popular for covered dish dinners, potlucks, church dinners and tailgate parties. They are also sold in small-town restaurants, drive-ins and bars. The sandwich can also be found at "Ohio" community dinners on the Gulf Coast of Florida held by retirees or snowbirds from Ohio.

All content from Kiddle encyclopedia articles (including the article images and facts) can be freely used under Attribution-ShareAlike license, unless stated otherwise. Cite this article:
Chicken sandwich Facts for Kids. Kiddle Encyclopedia.