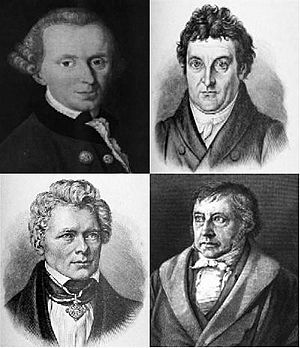 German idealism is a group of theories in philosophy that began in Germany in the late eighteenth and early nineteenth centuries. It was related to the Enlightenment and the French revolution. German idealists believed that nothing exists without the mind. This means that while the world exists, our knowledge about the outside world is limited to our experiences. Kant, Hegel, Fichte, and Schelling were the most famous German idealists.

All content from Kiddle encyclopedia articles (including the article images and facts) can be freely used under Attribution-ShareAlike license, unless stated otherwise. Cite this article:
German idealism Facts for Kids. Kiddle Encyclopedia.