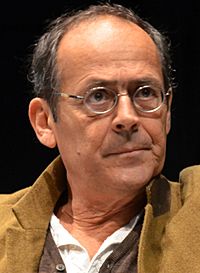 Bernard Stiegler ( 1 April 1952 – 6 August 2020) was a French philosopher. He was head of the Institut de recherche et d'innovation (IRI), which he founded in 2006 at the Centre Georges-Pompidou. His best known work was Technics and Time, 1: The Fault of Epimetheus and Echographies of Television. He was born in Seine-et-Oise, France.

All content from Kiddle encyclopedia articles (including the article images and facts) can be freely used under Attribution-ShareAlike license, unless stated otherwise. Cite this article:
Bernard Stiegler Facts for Kids. Kiddle Encyclopedia.