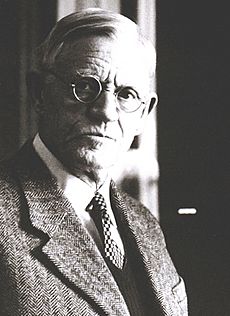 Middle Chinese (Chinese: 中古漢語; pinyin: zhōnggǔ Hànyǔ), or Ancient Chinese as used by linguist Bernhard Karlgren is a name given to an older version of the Chinese language. People spoke it during Southern and Northern Dynasties and the Sui, Tang, and Song dynasties (6th century - 10th century). The term "Middle Chinese", in contrast to Old Chinese and Modern Chinese, is usually used for historical Chinese phonology, which wants to reconstruct the pronunciation of Chinese used during these times.

Middle Chinese can be divided further. There was an early period and a later period. These can be told apart by the pronunciation of certain sounds that changed.

All content from Kiddle encyclopedia articles (including the article images and facts) can be freely used under Attribution-ShareAlike license, unless stated otherwise. Cite this article:
Middle Chinese Facts for Kids. Kiddle Encyclopedia.