Jerome Siegel (October 17, 1914 – January 28, 1996), was the American co-creator, along with Joe Shuster, of Superman, the first of the great comic book superheroes and one of the most recognizable of the 20th century.

The Superman, produced by Jerry Siegel and Joe Shuster in 1933, and forerunner to the character "Superman"

He attended Glenville High School in Cleveland, Ohio. At about age 16, while at Glenville, he befriended Joe Shuster. They shared a love of science fiction, adventure fiction, and movies.

Siegel wrote for his school's weekly newspaper, The Glenville Torch. One of his known works for that newspaper was Goober the Mighty, a parody of Tarzan. Joseph Shuster provided illustrations for some of Siegel's Goober stories. This was their first known collaboration as writer and artist.

They came up with the idea to do their own comic strip. Hoping to sell it as a newspaper comic-strip. After years of failing to achieve this, Siegel and Shuster agreed to publish Superman in a comic book. In March 1938, they sold all rights to Superman to the comic-book publisher Detective Comics, Inc., another forerunner of DC, for $130 ($2,000 when adjusted for inflation).

Superman was immediately successful. Siegel moved into a house in University Heights and bought himself a car. 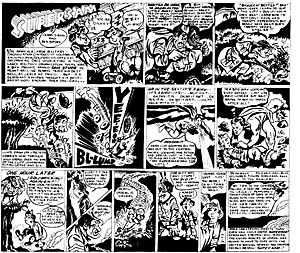 Comic strip written by Jerry Siegel and Ben Bryan, who were at the time, soldiers in the US Army

Siegel was conscripted into the US Army on June 28, 1943. He was trained at Fort George G. Meade, where he was trained as an "Airplane Engine Mechanic, a Film Editor, Motion Picture Cutter, Public Relations Man or Playwright (Motion Picture Writer) or Reporter". He was posted in Honolulu, where he was assigned a writing job at the military newspaper Stars and Stripes. He focused mainly on comedy columns. Siegel was discharged on January 21, 1946, at the rank of Technician 4th Grade.

After the war, Siegel settled in New York, eventually buying a house on Long Island.

During his first tenure at DC Comics (1935-1943), Siegel created the following characters:

During his second tenure at DC Comics (1959-1966), Siegel created the following characters:

Siegel died on January 28, 1996, of a heart attack. He had been suffering from cardiac disease for years, and had had a bypass operation. he is buried at Hollywood Forever Cemetery, Hollywood, Los Angeles County, California.

All content from Kiddle encyclopedia articles (including the article images and facts) can be freely used under Attribution-ShareAlike license, unless stated otherwise. Cite this article:
Jerry Siegel Facts for Kids. Kiddle Encyclopedia.