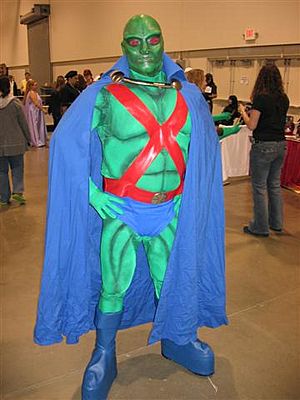 The Martian Manhunter (J'onn J'onzz) is a fictional superhero appearing in American comic books published by DC Comics. He was created by writer Joseph Samachson and designed by artist Joe Certa. The character first appeared in the story "The Manhunter from Mars" in Detective Comics #225 (Nov. 1955). Martian Manhunter is one of the seven original members of the Justice League of America.

J'onn J'onzz has featured in other DC Comics-endorsed products, such as video games like Injustice: Gods Among Us, television series, animated films, and merchandise like action figures and trading cards. The character was ranked #43 on IGN's greatest comic book hero list.

All content from Kiddle encyclopedia articles (including the article images and facts) can be freely used under Attribution-ShareAlike license, unless stated otherwise. Cite this article:
Martian Manhunter Facts for Kids. Kiddle Encyclopedia.