Deal Island, the largest island of the Kent Group, is a 1,576-hectare (3,890-acre) granite island, located in northern Bass Strait, that lies between the Furneaux Group, north-east of Tasmania, and Wilsons Promontory, in Victoria, Australia.

The island is contained entirely within the 2,374-hectare (5,870-acre) Kent Group National Park, Tasmania’s northernmost national park, gazetted in 2002. In 2004 the national park was extended to include the state waters of the three major islands of the Kent Group marine waters, encapsulating 29,000 hectares (72,000 acres) of marine reserve.

The Deal Island is located at the southern end of the 292,800-hectare (724,000-acre) Beagle Commonwealth Marine Reserve, that encloses the Kent Group Marine Reserve and the Hogan and Curtis Island groups.

Deal Island has been extensively modified in the past by human activity in the construction of facilities and the vegetation clearance and regular firing associated with grazing livestock. It has a lighthouse, airstrip (closed), roads, jetty, two houses, a dam and a museum. 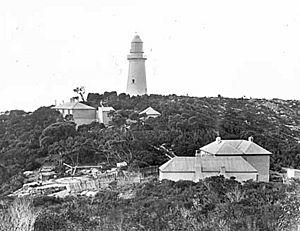 Deal Island has the highest lighthouse in the Southern Hemisphere, standing 305 metres (1,001 ft) above sea level and was sometimes visible at night from Wilson's Promontory, 80 kilometres (50 mi) away. The lighthouse was built in 1848 and deactivated in 1992. While active, the height caused problems with visibility in low cloud conditions. Management and conservation is under the control of the Tasmania Parks and Wildlife Service.

On 26 April 1943 during World War II an RAAF A25 Airspeed Oxford aircraft crashed killing all four crewmen. The aircraft wreck and their graves are about 15 metres (49 ft) apart at the bottom of the cliff. The bodies have since been disinterred and buried at Springvale, Victoria. Eyewitness accounts say the plane flew low over a ship which was actually a wreck, and then failed to regain enough height before hitting the cliff.

All content from Kiddle encyclopedia articles (including the article images and facts) can be freely used under Attribution-ShareAlike license, unless stated otherwise. Cite this article:
Deal Island (Tasmania) Facts for Kids. Kiddle Encyclopedia.