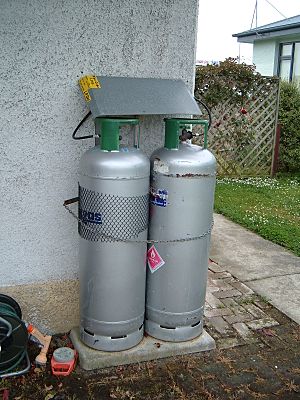 Liquefied petroleum gas (also known as LPG, LP Gas or autogas) is a mixture of hydrocarbon gases. It is commonly used in the household, for example for cooking, or as fuel for heating. LPG is replacing Chlorofluorocarbons more and more, also because it is less harmful to the ozone layer.

Very often, mixes of propane and butane are sold.

LPG has a very wide variety of uses, mainly used for cylinders across many different markets as an efficient fuel container in the agricultural, recreation, hospitality, calefaction, construction, sailing and fishing sectors. It can serve as fuel for cooking, central heating and to water heating and is a particularly cost-effective and efficient way to heat off-grid homes.

LPG is used for cooking in many countries for economic reasons, for convenience or because it is the preferred fuel source.

In India, nearly 8.9 million tons LPG was consumed during April to September 2016 (six months) in domestic sector mainly for cooking. The number of domestic connections are 215 million (i.e. one connection for every six people) with a circulation of more than 350 million LPG cylinders. Most of the LPG requirement is imported. Piped city gas supply in India is not yet developed on major scale. LPG is subsidised by the government in India for domestic users. Increase in LPG prices has been a politically sensitive matter in India as it potentially affects the middle class voting pattern.

LPG was once a standard cooking fuel in Hong Kong; however, the continued expansion of town gas to newer buildings has reduced LPG usage to less than 24% of residential units. However, other than electric, induction or infrared stove; LPG-fueled stove is the only type available in most suburban villages and many public housing estates.

LPG is the most common cooking fuel in Brazilian urban areas, being used in virtually all households, with the exception of the cities of Rio de Janeiro and São Paulo, which have a natural gas pipeline infrastructure. Poor families receive a government grant ("Vale Gás") used exclusively for the acquisition of LPG.

LPG is commonly used in North America for domestic cooking and outdoor grilling. 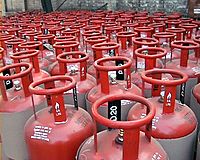 Cylinders with LP gas in India

Predominantly in Europe and rural parts of many countries, LPG can provide an alternative to electric heating, heating oil, or kerosene. LPG is most often used in areas that do not have direct access to piped natural gas.

LPG can be used as a power source for combined heat and power technologies (CHP). CHP is the process of generating both electrical power and useful heat from a single fuel source. This technology has allowed LPG to be used not just as fuel for heating and cooking, but also for decentralized generation of electricity.

LPG can be stored in a variety of manners. LPG, as with other fossil fuels, can be combined with renewable power sources to provide greater reliability while still achieving some reduction in CO2 emissions. However, as opposed to wind and solar renewable energy sources, LPG can be used as a standalone energy source without the prohobotive expense of electrical energy storage. In many climates renewable sources such as solar and wind power would still require the construction, installation and maintenance of reliable baseload power sources such as LPG fueled generation to provide electrical power during the entire year. 100% wind/solar is possible, the caveat being that even in 2018 the expense of the additional generation capacity necessary to charge batteries, plus the cost of battery electrical storage, still makes this option economically feasible in only a minority of situations. 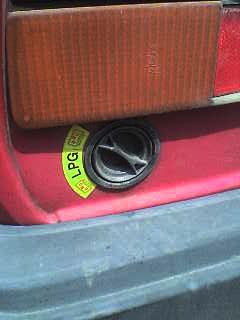 When LPG is used to fuel internal combustion engines, it is often referred to as autogas or auto propane. In some countries, it has been used since the 1940s as a petrol alternative for spark ignition engines. In some countries, there are additives in the liquid that extend engine life and the ratio of butane to propane is kept quite precise in fuel LPG. Two recent studies have examined LPG-fuel-oil fuel mixes and found that smoke emissions and fuel consumption are reduced but hydrocarbon emissions are increased. The studies were split on CO emissions, with one finding significant increases, and the other finding slight increases at low engine load but a considerable decrease at high engine load. Its advantage is that it is non-toxic, non-corrosive and free of tetraethyllead or any additives, and has a high octane rating (102–108 RON depending on local specifications). It burns more cleanly than petrol or fuel-oil and is especially free of the particulates present in the latter.

Not all automobile engines are suitable for use with LPG as a fuel. LPG provides less upper cylinder lubrication than petrol or diesel, so LPG-fueled engines are more prone to valve wear if they are not suitably modified. Many modern common rail diesel engines respond well to LPG use as a supplementary fuel. This is where LPG is used as fuel as well as diesel. Systems are now available that integrate with OEM engine management systems.

LPG can be converted into alkylate which is a premium gasoline blending stock because it has exceptional anti-knock properties and gives clean burning.

LPG is instrumental in providing off-the-grid refrigeration, usually by means of a gas absorption refrigerator.

Blended of pure, dry propane (refrigerant designator R-290) and isobutane (R-600a) the blend "R-290a" has negligible ozone depletion potential and very low global warming potential and can serve as a functional replacement for R-12, R-22, R-134a and other chlorofluorocarbon or hydrofluorocarbon refrigerants in conventional stationary refrigeration and air conditioning systems.

Such substitution is widely prohibited or discouraged in motor vehicle air conditioning systems, on the grounds that using flammable hydrocarbons in systems originally designed to carry non-flammable refrigerant presents a significant risk of fire or explosion.

Vendors and advocates of hydrocarbon refrigerants argue against such bans on the grounds that there have been very few such incidents relative to the number of vehicle air conditioning systems filled with hydrocarbons. One particular test, conducted by a professor at the University of New South Wales, unintentionally tested the worst-case scenario of a sudden and complete refrigerant expulsion into the passenger compartment followed by subsequent ignition. He and several others in the car sustained minor burns to their face, ears, and hands, and several observers received lacerations from the burst glass of the front passenger window. No one was seriously injured.

All content from Kiddle encyclopedia articles (including the article images and facts) can be freely used under Attribution-ShareAlike license, unless stated otherwise. Cite this article:
Liquefied petroleum gas Facts for Kids. Kiddle Encyclopedia.