Milford Oyster Festival, sometimes shortened to "Oysterfest," is an annual cultural festival held on the third Saturday of August throughout the city of Milford, Connecticut. As a major tourist attraction, billed as the largest one-day festival in the New England region and listed among the top 10 annual events in Connecticut, the Oyster Festival draws over 50,000 attendees each year. It is planned by the non-profit organization Annual Milford Oyster Festival, inc. (AMOF), largely run by volunteers.

The festival hosts a wide variety of activities for all ages, including arts, crafts, music, sports, amusement rides, food, and oyster shucking.

Oyster Huts on Milford Point a sketch by John Warner Barber for his Historical Collections of Connecticut (1836).

The first Milford Oyster Festival was held on the Milford Green and Fowler Field on 23 August 1975. Major founders of the oysterfest include Diano Nytko, first chairperson of the Milford Chamber of Commerce, and Robert N. Cooke, for whom the Bob Cooke Skin Cancer Foundation was named.

Since then the oyster festival has become firmly established as an annual Milford tradition, held rain or shine. In the past, the oysterfest was held over two days, but that proved to be too much a burden on the organizers.

While initially established as an oyster festival, the presence of actual oysters gradually faded after some time and were absent for many years outside of the festival's name. In 2005, oysters returned to the festival, provided by the East Coast Shellfish Growers Association. They have been there ever since.

Starting in 2009, Milford began requiring that the non-profit AMOF reimburse the city, which spends $30,000-50,000 to host the festival each year. As a result of this decision, AMOF could no longer allow other local non-profits to sell beer at the event, as it is a major source of income for many of the non-profits. This led Alderman Ben Blake to express concern that the festival may "lose its local flavor" as "nonprofit groups [are driven] out of the Oyster Festival food court."

Many local and regional businesses, non-profits, and governmental groups have sponsored the event, including NBC Universal, TD Bank, and Whole Foods Market.

Money raised by AMOF during the festival has been donated for charitable purposes. In 2010, the major fundraiser of the festival was for Gulf coast fishing communities, whose oyster industries were struggling after being shut down by the BP's Deepwater Horizon oil spill. 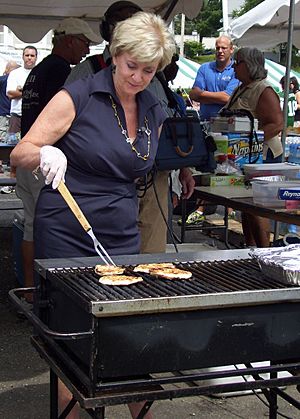 Linda McMahon takes a moment to grill some chicken with local Republican activists while on the campaign trail at the 2010 festival.

On the Friday evening before the oysterfest, there is a surrounding event called "Oyster Eve," which includes activities such as dancing, dining, and a 90-minute cruise on an 80-foot-long (24 m) schooner around the Long Island Sound. Around 1,500 people came to downtown Milford for Oyster Eve in 2010.

In 2010, the Daniel Street nightclub began hosting what they dubbed the "1st Annual Oyster Festival After Party" on the evening after the main events close.

All content from Kiddle encyclopedia articles (including the article images and facts) can be freely used under Attribution-ShareAlike license, unless stated otherwise. Cite this article:
Milford Oyster Festival Facts for Kids. Kiddle Encyclopedia.