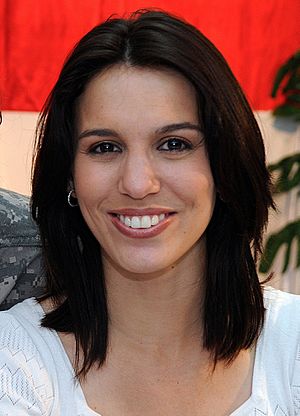 Christy Carlson Romano (March 20, 1984) is an American actress and musician. She recorded songs for Disney-related movies. She was the voice for the title character in the show Kim Possible. She also played a trick-or-treat child in Everyone Says I Love You in 1996. Carlson Romano was born in Connecticut.

All content from Kiddle encyclopedia articles (including the article images and facts) can be freely used under Attribution-ShareAlike license, unless stated otherwise. Cite this article:
Christy Carlson Romano Facts for Kids. Kiddle Encyclopedia.