The Flaming Gorge - Uintas Scenic Byway is a National Scenic Byway in the state of Utah. It spans approximately 80 miles (130 km) as it travels from Vernal, Utah northward through the Ashley National Forest and the Uintah Mountains to the area around Flaming Gorge National Recreation Area in the northeastern corner of the state. 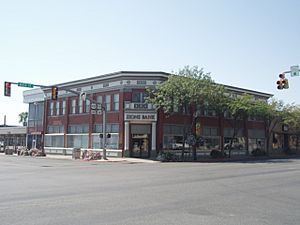 Southern terminus of the scenic byway in Vernal, October 2010

The south end of this route starts out in Vernal, Uintah County at the intersection of US-40 and US-191. From there, it travels north on US-191, enters Ashley National Forest, and passes Steinaker State Park and Red Fleet State Park as it starts to climb into the Uinta Mountains. It continues north on its climb, encountering several switchbacks before topping out close to 8,400 feet (2,600 m) in elevation. As it gradually starts to descend it enters Daggett County before it enters Flaming Gorge National Recreation Area. Just inside the recreation area boundaries, the route splits in two. 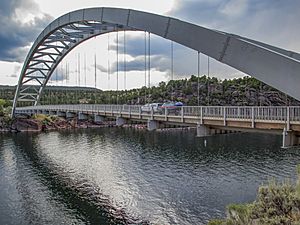 Taking the left branch, the route follows SR-44 westward, which forms the southern boundary of the recreation area in this area, roughly following the southern rim of Flaming Gorge, passing a turnoff to the Red Canyon Overlook and Visitors Center. As SR-44 approaches the western edge of the recreation area, it starts to turn in a northerly direction overall, descending in a series of turns as it approaches the southwestern tip of Flaming Gorge Reservoir and passes through Sheep Creek Gap. From this point, the route turns north, exits the recreation area, and continues a few miles further before it ends at the intersection of SR-43 in Manila.

For the histories of this route's constituent highways prior to its scenic byway designation, refer to:

The scenic byway was formed in 1988 as Utah's first Forest Service Byway. It was added to the National Scenic Byways system on June 9, 1998.

All content from Kiddle encyclopedia articles (including the article images and facts) can be freely used under Attribution-ShareAlike license, unless stated otherwise. Cite this article:
Flaming Gorge-Uintas Scenic Byway Facts for Kids. Kiddle Encyclopedia.