Red Fleet State Park is a state park of Utah, United States, featuring a 750-acre (300 ha) reservoir and a fossil trackway of dinosaur footprints. The park is located 10 miles (16 km) north of Vernal. 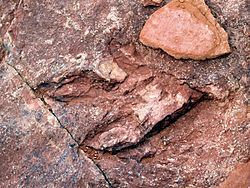 Probable Dilophosaurus footprint on the trackway

Red Fleet State Park lies at an elevation of 5,500 feet (1,700 m) in northeastern Utah, immediately south of the Uinta Mountains. The climate is arid with hot summers and cold winters. Surrounded by red slick rock formations, the park got its name from three large Navajo sandstone outcrops that look like a fleet of ships as they jut up from the reservoir.

All content from Kiddle encyclopedia articles (including the article images and facts) can be freely used under Attribution-ShareAlike license, unless stated otherwise. Cite this article:
Red Fleet State Park Facts for Kids. Kiddle Encyclopedia.