Troutdale is a city in Multnomah County, Oregon, United States, immediately north of Gresham and east of Wood Village. As of the 2010 census, the city population was 15,962. The city serves as the western gateway to the Historic Columbia River Highway, the Mount Hood Scenic Byway, and the Columbia River Gorge. It is approximately 12 miles (19 km) east of Portland.

The community was once known as Sandy, after the nearby Sandy River; Sandy post office was established in 1854 and closed in 1868. In 1873, the current city of Sandy in Clackamas County, which was formerly named "Revenue", established a different Sandy post office that is still in operation. Troutdale was named by pioneer John Harlow for the trout pond in a dale near his house. Troutdale post office was founded in 1880. In 1920, a company called the "Bissinger Company", or "Bissinger Wool Pullery", built a firm and a water tower in the city, which are both standing and can both be seen today. The company was supposedly featured on a Ripley's Believe it or Not! column because a cat was found in a stack of animal hides that the company was going to use for its products. The cat was taken care of and became the company's mascot. The cat lived a long and healthy life. The water tower is now known as the "Old Historic Water Tower".

Troutdale is located at the confluence of the Sandy and Columbia rivers.

This region experiences warm (but not hot) and dry summers, with no average monthly temperatures above 71.6 °F. According to the Köppen Climate Classification system, Troutdale has a warm-summer Mediterranean climate, abbreviated "Csb" on climate maps.

There were 5,671 households, of which 40.3% had children under the age of 18 living with them, 55.7% were married couples living together, 12.9% had a female householder with no husband present, 5.6% had a male householder with no wife present, and 25.8% were non-families. 18.8% of all households were made up of individuals, and 5.1% had someone living alone who was 65 years of age or older. The average household size was 2.81 and the average family size was 3.20. 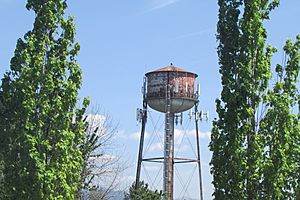 The old historic water tower as seen from downtown.

Troutdale is the home of one of the most notable locations of the local McMenamins brewpub and hotel chain, the 38-acre (154,000 m2) Edgefield, which was formerly the Multnomah County Poor Farm. The site has a hotel and a variety of restaurants, bars, and entertainment venues. Edgefield is listed on the National Register of Historic Places (NRHP).

Other buildings on the NRHP in Troutdale include the Fred Harlow House, and the Troutdale Methodist Episcopal Church

From at least the 1940s through the 1960s, bus transit service connecting Troutdale with Gresham and Portland was provided by a private company named Portland Stages, Inc. This service was taken over by TriMet, a then-new public agency, in 1970, and TriMet continues to provide transit service in Troutdale today. Columbia Area Transit operates the Columbia Gorge Express to Portland and Hood River.

The Troutdale Airport serves as a base for scenic aerial tours of the Columbia River Gorge provided by Envi Adventures. 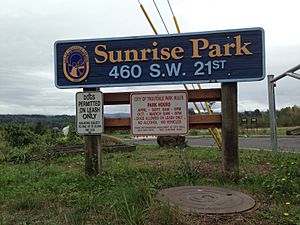 Sunrise Park is a municipal park in Troutdale that consists of a half-mile long looping trail and rentable garden beds. 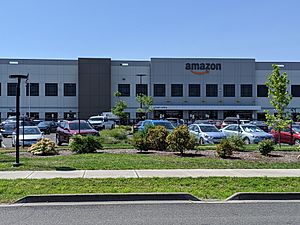 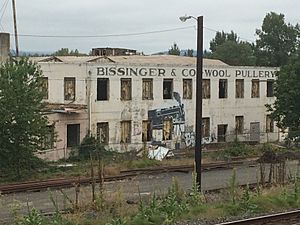 The local economy has shifted since the start of the century as the Portland region continues to grow. While the majority of residents work in Portland or Gresham, recent industrial development related to at the Port of Portland's Troutdale Reynolds Industrial Park has helped turned the community into a jobs center for the region.

FedEx is currently the largest employer in the city, with a sizable distribution facility for its FedEx Ground operations. Other major employers include Amazon, Reynolds School District, Multnomah County Sheriff's Office, Albertsons/Safeway, The Home Depot, and McMenamins.

All content from Kiddle encyclopedia articles (including the article images and facts) can be freely used under Attribution-ShareAlike license, unless stated otherwise. Cite this article:
Troutdale, Oregon Facts for Kids. Kiddle Encyclopedia.