Gresham is a city located in Multnomah County, Oregon, United States, immediately east of Portland. Though it began as a settlement in the mid-1800s, it was not officially incorporated as a city until 1905, by which it was named after the American Civil War general, and Postmaster General, Walter Quinton Gresham.

The city's early economy was sustained largely by farming, and by the mid-20th century, experienced a population boom, growing from four-thousand residents to over ten-thousand between 1960 and 1970. The population was 105,594 at the 2010 census, making Gresham the fourth largest city in Oregon. 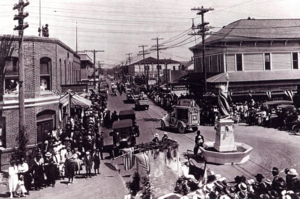 The area now known as Gresham was first settled in 1851 by the brothers Jackson and James Powell, who claimed land under the Donation Land Claim Act of 1850. They were soon joined by other pioneer families, and the area came to be known as Powell's Valley. In 1884, a local merchant petitioned the United States Postal Service to get a post office in his store and offered to name it after the Postmaster General Walter Q. Gresham if his request was granted. At the same time, other members of the community secured a post office called "Campground," another name for the area referencing the religious camp meeting ground located there and the valley's usefulness as a stop-off for travelers on their way to Portland. Once the Postal Service realized their mistake, they revoked the Campground post office.

Gresham was incorporated in 1905, the year of the Lewis and Clark Centennial Exposition. Its population at the time was 365. Lewis Shattuck, son of a pioneer family, was the first mayor. The town's economy was fueled largely by farming, including berries, grapes, and vegetables. At the time, trains ran between Gresham and Portland on an hourly basis. Gresham's early settlers would go on to form the outlying communities of Boring, Sandy, Fairview, and Estacada.

Gresham's city library, which began as a small book collection in the town general store, was officially established as the Gresham Branch Public Library in 1913 with a grant from the Andrew Carnegie library fund. 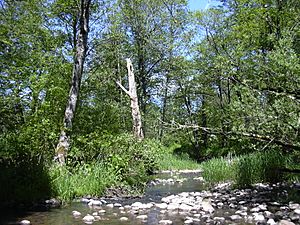 Gresham is located twelve miles from downtown Portland; the dividing line between Portland and Gresham's city limits is at SE 162nd Street. As with Portland, Gresham's north and south borders are divided along Burnside Street, which becomes the Mount Hood Highway in east Gresham. The city is located roughly seventy miles east of the Oregon Coast.

Though much of Gresham is relatively flat, Northeast Gresham is hilly, particularly where the city meets Troutdale toward the Columbia River. Its elevation is 325 feet (91.7 meters). Johnson Creek, which begins at the foothills of the Cascade Mountains, runs westward through Gresham, with 23 percent of the creek's watershed running through the city.

There were 38,704 households of which 36.9% had children under the age of 18 living with them, 46.6% were married couples living together, 14.3% had a female householder with no husband present, 5.9% had a male householder with no wife present, and 33.2% were non-families. 25.2% of all households were made up of individuals and 8.8% had someone living alone who was 65 years of age or older. The average household size was 2.69 and the average family size was 3.22. 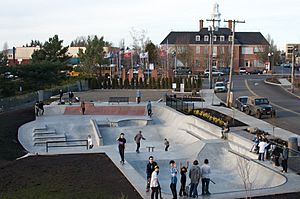 There are numerous parks in Gresham: Main City Park, located near downtown Gresham. Other parks include East Gresham Park, Red Sunset Park, and Clatsop Butte Park, an upland butte located south of Powell Butte, which runs between Portland and Gresham. Other public points of interest are the Gresham Pioneer Cemetery, established in 1859, and the Plaza del Sol. 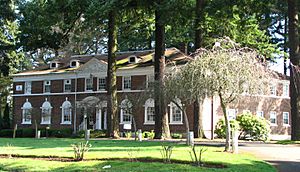 There are several National Register of Historic Places sites located in Gresham. The Louise Albertina Kerr Home, formerly a hospital and residence hall, is located in west Gresham, and serves as a social services facility. Other sites include: the Jacob Zimmerman House, a farmhouse built by German-American settlers in 1874; the Hamlin–Johnson House, a farmhouse built in 1888; the Emanuel and Christina Anderson House and William Gedamke House, both Victorian Queen Anne homes built circa 1900; the Gresham Carnegie Library, built in 1913; the Dr. Herbert H. Hughes House, built in 1922; the Charles and Fae Olson House, a modernist home built in 1946; and the David and Marianne Ott House, a ranch home built in 1952.

Gresham is accessed from the west via Interstate 84 and U.S. Route 26, from the east.

Gresham is serviced by TriMet's bus system and the MAX Light Rail Blue Line, which includes the following MAX stations:

Gresham has sister cities in other countries. They are:

All content from Kiddle encyclopedia articles (including the article images and facts) can be freely used under Attribution-ShareAlike license, unless stated otherwise. Cite this article:
Gresham, Oregon Facts for Kids. Kiddle Encyclopedia.