Sandy is a city located in Clackamas County, Oregon, United States, settled c. 1853 and named after the nearby Sandy River. Located in the foothills of the Cascade Mountain Range, the city serves as the western gateway to the Mount Hood Corridor, and is located approximately 27 miles (43 km) east of Portland.

The city of Sandy was originally settled by travelers passing along Barlow Road, one of the final sections of the Oregon Trail, and initially known as Revenue, after settlers Francis and Lydia Revenue. The city subsequently took the name Sandy after the Sandy River, named by Meriwether Lewis and William Clark in 1805; the river and previously been named the Barings River, after Sir Francis Baring, 1st Baronet, following a 1792 expedition in the region.

In the late-19th and early 20th century, Sandy's local economy was mainly based on logging and the sawmill industry due to the abundance of timber in the area. The city continued to grow with the arrival of German immigrants in the late-nineteenth century, and the city was formally incorporated in 1911. In the latter half of the 20th century, the city's population saw a significant increase in residents, concurrent with the growth of the Portland metropolitan area.

As of the 2010 census, the city had a total population of 9,570. It is the home of Sandy High School, founded in 1914, which serves the population of Sandy as well as outlying communities, such as Boring and the Villages of Mount Hood.

According to the United States Census Bureau, the city has a total area of 3.14 square miles (8.13 km2), all of it land.

This region experiences warm (but not hot) and dry summers, with no average monthly temperatures above 71.6 °F (22.0 °C). According to the Köppen Climate Classification system, Sandy has a warm-summer Mediterranean climate, abbreviated "Csb" on climate maps. 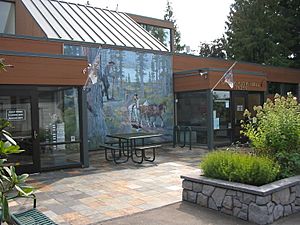 U.S. Route 26 runs through the middle of Sandy, forming downtown Sandy's Pioneer and Proctor Boulevards. Sandy is the northern terminus of Oregon Route 211.

From at least the 1940s through the 1960s, bus transit service connecting Sandy with Gresham and Portland was provided by a private company named Portland Stages, Inc. This service was taken over by TriMet, a then-new public agency, in 1970, and TriMet continued to provide transit service to Sandy until 2000.

Since the beginning of 2000, Sandy has operated its own public transit system, the Sandy Area Metro, which connects with Tri-Met's MAX light rail line at the Gresham Transit Center and the Mountain Express.

Sandy is the home of the annual Sandy Mountain Festival, the Sandy Oktoberfest and the yearly Hometown Holiday Festival and Parade.

Jonsrud Viewpoint, a wonderful view of Mt. Hood and the Sandy River valley. This viewpoint was donated to the City of Sandy by Philip Jonsrud, a son of early settlers and lifelong resident of Sandy.

The Tickle Creek Trail is a beautiful scenic route, located off Dubarko Rd. Also known as 'The heart and soul of Sandy Oregon.'

All content from Kiddle encyclopedia articles (including the article images and facts) can be freely used under Attribution-ShareAlike license, unless stated otherwise. Cite this article:
Sandy, Oregon Facts for Kids. Kiddle Encyclopedia.