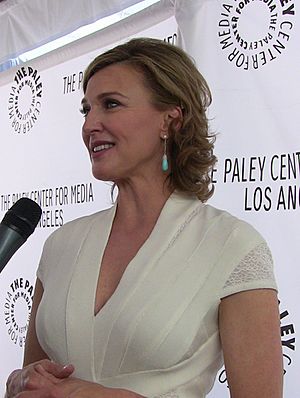 Brenda Strong (born March 25, 1960 in Oregon) is an American actress who stars primarily in television programs. She has, however, starred in a limited number of movies. She acted as Mary Alice Young in the ABC sitcom Desperate Housewives and as Ann Ewing in the TNT television drama Dallas, the 2012 edition. Before acting, she was crowned Miss Arizona 1980.

All content from Kiddle encyclopedia articles (including the article images and facts) can be freely used under Attribution-ShareAlike license, unless stated otherwise. Cite this article:
Brenda Strong Facts for Kids. Kiddle Encyclopedia.