Brenda Song (born March 27, 1988) is an American actress and singer. She is also a former child model. Song was first famous for her appearances on the Disney Channel. She was a regular part on The Suite Life of Zack and Cody. Her character was noted as one of the Disney Channel's longest continuous characters. In 2010, she moved into mainstream movies and TV. These included Changeland, Angry Angel, and Station 19.

Brenda Song was born in Carmichael, California to a Hmong American father and a Thai American mother. Song has two younger brothers, Timmy and Nathan. Brenda Song holds a black belt in Tae Kwon Do and was named an All-American Scholar in ninth grade.

Brenda Song began acting and modeling at age 6. She also played a very minor role in a skit on MADtv.

One of Song's more notable acting roles is her portrayal of London Tipton in the Disney Channel Original Series The Suite Life of Zack and Cody (along with Ashley Tisdale and twins Cole and Dylan Sprouse). She later continued this role in the spin-off The Suite Life on Deck. She also played a recurring role as Tia in the Disney Channel Original Series Phil of the Future. Song had minor guest appearances on both That's So Raven and American Dragon: Jake Long.

Song had her first starring role in 2006 in the movie Wendy Wu: Homecoming Warrior.

In 2010, Song was part of the main cast of The Social Network. This marked her entry into mainstream movies and TV.

In 2012, Song starred in the short film First Kiss along with her Social Network costar Joseph Mazzello.

In January 2019, Song was cast in a starring role in the Hulu television series Dollface alongside Kat Dennings.

She belongs to the Hmong tribe with their sacred and historical beliefs. She has received a black belt in one martial arts and had used her skills in the Disney Channel movie, Wendy Wu:Homecoming Warrior. 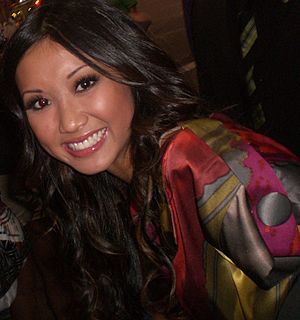 Song at The Cheetah Girls: One World premiere on August 12, 2008

All content from Kiddle encyclopedia articles (including the article images and facts) can be freely used under Attribution-ShareAlike license, unless stated otherwise. Cite this article:
Brenda Song Facts for Kids. Kiddle Encyclopedia.