The city of Hood River is the seat of Hood River County, Oregon, United States. It is a port on the Columbia River, and is named for the nearby Hood River. As of the 2010 census, the city population was 7,167.

Hood River (originally called Dog River) post office was established (named by Mary Coe) at the site of the present city on September 30, 1858, and the city itself was incorporated in 1895. Originally, the city was part of Wasco County, but it became the seat of Hood River County when the county was first established in 1908.

Located at the transition zone between wet temperate rainforest to the west, and dry shrub-steppe desert to the east, Hood River has a moderate climate with rainy winters and warm summers, although rainfall there is somewhat less than Portland and other nearby areas in the Willamette Valley. Hood River averages around 30 inches (760 mm) of precipitation a year, while Cascade Locks, 20 miles (32 km) west, receives over 75 inches (1,900 mm), and The Dalles, 20 miles (32 km) east, less than 15 inches (380 mm). The area is known for its consistently high winds channeling down the Columbia River Gorge.

Temperatures for the year as a whole are slightly cooler than most other low-elevation towns in the region, especially at night due to air drainage off the surrounding mountains. As a rule of thumb, Hood River temperatures are similar to those of Portland in the summer, but more like The Dalles in the winter.

There were 2,972 households of which 33.8% had children under the age of 18 living with them, 43.2% were married couples living together, 11.0% had a female householder with no husband present, 4.0% had a male householder with no wife present, and 41.9% were non-families. 33.4% of all households were made up of individuals and 13.8% had someone living alone who was 65 years of age or older. The average household size was 2.39 and the average family size was 3.12.

There were 2,429 households out of which 32.3% had children under the age of 18 living with them, 44.1% were married couples living together, 11.6% had a female householder with no husband present, and 40.6% were non-families. 32.8% of all households were made up of individuals and 14.8% had someone living alone who was 65 years of age or older. The average household size was 2.38 and the average family size was 3.06. 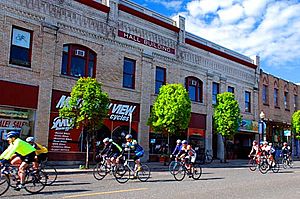 Annual cultural events include the Hood River Valley Blossom Festival, which takes place in April, the Hood River Hops Fest, and the Hood River Valley Harvest Fest, both in October. FoodandWine.com identified the Harvest Fest as one of the Best Harvest Festivals in 2012. The annual Gorge Games, aired on Fox Sports in August, feature professional competitions in ten sports such as windsurfing, kitesurfing, outrigger canoeing, and rock climbing. Hood River hosted the US Windsurfing National Championships in 2009 and the Mount Hood Cycling Classic from 2002 to 2013. 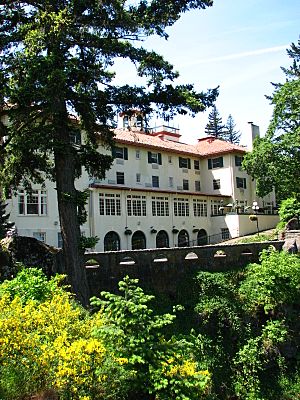 Hood River is home to the History Museum of Hood River County, the International Museum of Carousel Art, and the Western Antique Aeroplane & Automobile Museum (WAAAM). Hood River has over two dozen sites listed on the National Register of Historic Places, including the Columbia Gorge Hotel, built in 1920 by Portland timber baron and Columbia Gorge booster Simon Benson. The oldest house in the city is the Ezra L. Smith home, which he built in 1886 for his family.

Hood River is the western gateway to the Mount Hood Scenic Byway and to a major section of the Historic Columbia River Highway. Hood River is considered a "sports mecca" and offers some of the best spots for windsurfing, kitesurfing, kayaking, stand up paddleboarding, skiing and mountain biking—all for which it draws considerable national attention from many media outlets, such as National Geographic Adventure. The Port Commission has built a protected harbor for learning windsurfing called "The Hook". The city also features the family and wind-sport friendly Waterfront Park, a public pool, skate park, biking trails, and several small public parks and ball fields. The valley is also home to two 18-hole golf courses.

Hood River has one sister city, as designated by Sister Cities International:

All content from Kiddle encyclopedia articles (including the article images and facts) can be freely used under Attribution-ShareAlike license, unless stated otherwise. Cite this article:
Hood River, Oregon Facts for Kids. Kiddle Encyclopedia.