The majority of the railroad's revenue is generated from passenger excursions although a few small freight shippers remain that generate several carloads of traffic per week. 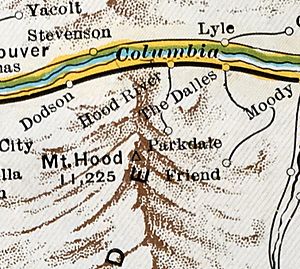 The northern terminus of the Mount Hood Railroad is at Hood River, Oregon, where the line interchanges with the Union Pacific Railroad. The line starts out parallel to the Hood River for the first three miles (4.8 km) until it reaches a switchback. Switchbacks used to be common, but this is now only one of five remaining railroad switchbacks in use in the United States. After the trains reverse direction at the switchback, the line continues south through the communities of Pine Grove, Odell, and Dee before reaching the southern end of the line at Parkdale. The total length of the line is approximately 22 miles.

The Mount Hood Railroad currently has two locomotives on its roster:

The line south out of Hood River was first built in 1906, extending as far as Dee. In 1909 the line was extended to the present-day end of track at Parkdale. The Union Pacific acquired the line in 1968 and operated it with the primary customers being fruit shippers and the lumber operation at Dee. As local industries switched to truck-based transportation for their goods, carloads on the line dwindled and the Union Pacific proposed abandoning the line. In 1987 a group of local investors purchased the railroad from Union Pacific and began to offer passenger excursions to augment the freight business. Brian Fleming sold the line again in 2008 to Permian Basin Railways, a subsidiary of Chicago-based Iowa Pacific Holdings.

Today the railroad offers four-hour scenic tours through the Hood River Valley and narrated historic excursion train tours, as well as special events. There are views of Mount Hood and Mount Adams along with the surrounding orchards and farmland of the Hood River Valley.

All content from Kiddle encyclopedia articles (including the article images and facts) can be freely used under Attribution-ShareAlike license, unless stated otherwise. Cite this article:
Mount Hood Railroad Facts for Kids. Kiddle Encyclopedia.