Wichita Mountains Wildlife Refuge, located in southwestern Oklahoma near Lawton, has protected unique wildlife habitats since 1901 and is the oldest managed wildlife facility in the United States Fish and Wildlife Service system. The refuge's location in the geologically unique Wichita Mountains and its areas of undisturbed mixed grass prairie make it an important conservation area. The Wichitas are approximately 500 million years old. Measuring about 59,020 acres (238.8 km2), the refuge hosts a great diversity of species: 806 plant species, 240 species of birds, 36 fish, and 64 reptiles and amphibians are present.

The Wichita Forest Reserve was established by the General Land Office in Oklahoma on July 4, 1901 with 57,120 acres (231.2 km2). After the transfer of federal forests to the U.S. Forest Service in 1905, it became a National Forest on March 4, 1907 as Wichita National Forest. On November 27, 1936 the forest was abolished and transferred to the Bureau of Biological Survey, a precursor to the Fish and Wildlife Service. It was re-designated the Wichita Mountains Wildlife Refuge (WMWR).

The WMWR is managed by the U.S. Fish and Wildlife Service. There are 13 small lakes within the reserve. 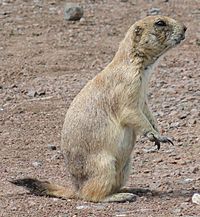 According to the U. S. Fish & Wildlife Service, 240 species of birds, 50 species of mammals, 64 species of reptiles and amphibians, and 36 species of fish have been documented.

Several species of large native mammals make their home at the refuge: plains bison, also known as the American buffalo, elk, white-tailed deer graze the prairies along with Texas longhorn cattle preserved for their cultural and historic importance. Bison, longhorns, and elk were introduced after the establishment of the refuge. Merriam's elk, the original subspecies of elk in this area, is extinct, so the elk in the refuge are Rocky Mountain elk. The ancestors of the herd were imported from Jackson Hole, Wyoming in 1911. The elk herd now numbers about 800 and white tailed deer about 450. These big game species are no longer considered "endangered." Many smaller mammal species also live in the refuge, including the nine-banded armadillo and the black-tailed prairie dog. Other species that have been reintroduced include: the river otter, burrowing owls and the prairie dog. Although these species were not listed as "endangered," USFWS policy is to assure that species that once were native to these mountains would always be found there. According to the Encyclopedia of Oklahoma History and Culture, the refuge failed in its attempt to reintroduce the American pronghorn antelope, bighorn sheep, and the prairie chicken.

Wichita Mountains Wildlife Refuge was important in saving the American buffalo from extinction. In 1907 the American Bison Society transported 15 bison, six bulls and nine cows, from the New York Zoological Park to the refuge. On arrival, the Comanche leader Quanah Parker and a host of other Indians and Whites turned out to welcome the bison. At that time, bison had been extinct on the southern Great Plains for 30 years. The bison herd now numbers about 650 on the refuge. In fall, bison in excess of the carrying capacity of the refuge are rounded up and sold.

The refuge is home to many species of birds, and it is one of the remaining homes of the endangered black-capped vireo.

The refuge is ecologically diverse, with prairie, ravine, and mountain plant communities. Portions of the refuge contain scrubby forest of mixed oak varieties. A disjunct population of bigtooth maple is found here, 400 miles (640 km) from the nearest natural population in West Texas. 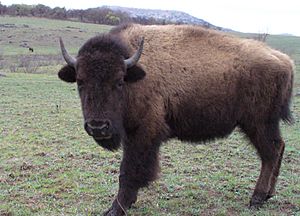 There is no admission charge. Public use areas on the refuge total 22,400 acres. The remaining 37,000 acres is closed to the public and for the exclusive use of wildlife although guided tours are scheduled. A visitor center and bookstore, open seven days a week, except on some holidays, displays art and has exhibits illustrating the four major habitats found on the refuge: Rocklands, Aquatic, Mixed-Grass Prairie, and Cross Timbers.

The refuge is a popular destination for recreational activities. Rock climbing is overwhelmingly popular, but visitors also enjoy hiking, camping, fishing, bird and wildlife watching, and photography. The refuge has an extensive trail system, including about 15 miles of official trails and unofficial trails. Many of these trails lead to climbing routes. The area became popular for rock climbing beginning in the 1960s and 1970s, and has become something of a regional mecca. Though climbing has brought many visitors to the refuge, some controversy exists over the use of fixed anchors, bolts and other permanently placed objects on the rock face. The refuge has joined with The Access Fund and the Wichita Mountains Climbers Coalition to promote responsible use of the Wichitas' resources. Rock climbing routes are found on Mt. Scott, the refuge's second highest summit, as well as areas such as the Narrows and the Charon Gardens Wilderness Area.

Fishing for largemouth bass, sunfish, crappie, and channel catfish is popular in the thirteen artificial lakes on the refuge. Elk and deer hunting, to cull excessive numbers, is permitted in a managed hunt every fall. Hunters are chosen by lottery and a fee is charged. A narrow winding road leads to the summit of Mount Scott, elevation 2,464 feet (751m), with a view that encompasses the whole refuge. Although the mountains rise only 800 to 1000 feet above the surrounding prairie they are steep and rocky. The highest mountain in the refuge is Mount Pinchot which rises to 2,479 feet (756m). Mount Pinchot was named in honor of Gifford Pinchot who served as the first Chief of the United States Forest Service.

All content from Kiddle encyclopedia articles (including the article images and facts) can be freely used under Attribution-ShareAlike license, unless stated otherwise. Cite this article:
Wichita Mountains Wildlife Refuge Facts for Kids. Kiddle Encyclopedia.