Golden is the Home Rule Municipality that is the county seat of Jefferson County, Colorado, United States. Golden lies along Clear Creek at the base of the Front Range of the Rocky Mountains. Founded during the Pike's Peak Gold Rush on 16 June 1859, the mining camp was originally named Golden City in honor of Thomas L. Golden. Golden City served as the capital of the provisional Territory of Jefferson from 1860 to 1861, and capital of the official Territory of Colorado from 1862 to 1867. In 1867, the territorial capital was moved about 12 miles (19 km) east to Denver City. The United States Census Bureau estimates that the city population was 18,867 in 2010.

The Colorado School of Mines, offering programs in engineering and science, is located in Golden. Also there are the National Renewable Energy Laboratory, National Earthquake Information Center, Coors Brewing Company, CoorsTek, Spyderco, American Mountaineering Center, and Colorado Railroad Museum. It is the birthplace of the Jolly Rancher, a candy bought out by the Hershey Foods Corporation. Famous western showman William F. "Buffalo Bill" Cody is buried nearby on Lookout Mountain. 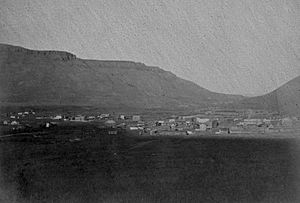 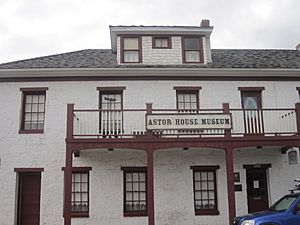 Astor House Museum, the first stone building in Golden, was a boarding and rooming house from 1867 to 1971.

Established as a gold-rush town, Golden City quickly became a leading economic and political center of the region, being a center of trade between the gold fields and the east, a crossroads and gateway of important roads leading to the mountains, and a center of area industry. Golden City was established on 16 June 1859 along Clear Creek west of Denver, named in honor of Thomas L. Golden. Important businessmen and prospectors such as William A.H. Loveland and George West were among the first to settle in Golden. By the end of 1860, Golden City had been popularly elected the seat of Jefferson County and was capital of the provisional Jefferson Territory. As drafted in the territorial constitution, the capital of the Jefferson Territory was initially proposed to be Golden, then with a population of 700, as a result of its proximity to mountain mining towns, and greater ability to hold a congressional quorum than had Denver. Golden City was temporarily removed from the status of territory capital as a result of an act passed on 5 November 1861 by the territorial government. Colorado City, a small town to the south of Denver became the new temporary territorial capital, but saw only one short event at this location. This status was quickly revoked, however, as on 4 August 1862, the territorial government voted formally to move back to Golden.

While the town lost much of its populace and leading citizenry during the American Civil War for several reasons (ranging from military to economic), Golden City became capital of the federally recognized Colorado Territory on 2 August 1862, continuing as such until 1867. It was the time period between 1862 and the early 1870s that a fierce railroad competition developed between Denver, ten miles to the east, and Golden. By the mid-1860s, Golden held only an honorific status as territorial capital rather than serve as the legitimate source of territorial power. Denver, the increasingly larger and more developed city, was the focused core of important territorial occasions, with the Governor residing in Denver, and territorial government meetings occurring there as well. The citizens and supporters of Golden realized that a spur from Golden to the new transcontinental railroad, running through Cheyenne, Wyoming, 100 miles to the north, was the only possibility for Golden to reemerge as the dominant heart of commerce in the territory. W.A.H. Loveland founded the Colorado Central Railroad on 9 February 1865 to do just this. With Golden beginning talk of creating a railroad, prominent Denver residents raced to do the same. In an appeal to the residents of Denver, The Rocky Mountain News, which was based in Denver itself, wrote an article imploring the citizens of Denver to vote to fun a railroad; “If we vote $500,000 in bonds to the Denver Pacific railway all is well. If we defeat those bonds, all hope of a railroad for the next two years is gone… Gentlemen of Denver, what will you do? The fate of your city is in your own hands.” The residents of Denver voted for the bonds, spurring construction of the Denver Pacific Railway. By 1869, the railroad race to Cheyenne was becoming less and less of a race, as the Denver Pacific Railway pulled ahead of the struggling Colorado Central Railroad. Realizing they were going to lose the race to Cheyenne, the Colorado Central began expanding west into mountain communities such as Georgetown, Black Hawk, and Central City, all areas founded on and focused in silver mining. Golden, having then sidetracked into servicing various close-by mountain communities, continued to fall behind the pace set by the Denver railroad, and by 1870, officially lost the race to Cheyenne. However, The Colorado Central Railroad connected directly with Cheyenne seven years later, in 1877, but by that point, the race with Denver had been lost.Although Golden’s Colorado Central Railroad offered a challenge to Denver’s railroad, the better funded Denver Pacific Railway was able to connect to Cheyenne far more quickly than Golden, securing for Denver its long term status as both capital and prominent city.

Golden City became the "Lowell of the West", a regional center of trade and industry that boasted at certain times three flour mills, five smelters, the first railroad into the Colorado mountains, the Coors Brewery, brick works, the only paper mill west of Missouri, clay and coal mines, and more. During the 1870s, it became home to three institutions of higher education, the Colorado University Schools, of which the Colorado School of Mines remains today. Golden was also home to an opera house and seven churches, including Colorado's third (Methodist) church, oldest Baptist church, likely oldest Christian (Disciples of Christ) church, and first Swedish immigrant (Lutheran) church. The town was home to sizable populations of German, Swedish, Italian and Chinese immigrants; five immigrants became mayors of Golden.

Until the early 20th century, Golden maintained a small town population of around 2,500 people. Several industries faded or were destroyed by tragic events, , but others flourished to continue Golden's industrial legacy, including its brewing, brick making, clay mining and porcelain industries. Golden became even more connected through mass transit, with two trolley lines extending to Denver, while the movie theater gradually took the place of the opera house for downtown entertainment. Downtown revitalization efforts began in the 1920s with its first streetscape and ornamental lighting project and urban renewal on its north and east, anchored by new senior high and grade schools. The historic cultural tension between the city's north and south sides gradually eased, and the town successfully endured additional major economic depressions, including the Silver Crash of 1893 and the Great Depression. The School of Mines gained a worldwide academic reputation, Coors rapidly came to the forefront of the national and international brewing and ceramics industries, and the city modernized with a recreation center, paved streets and more.

After World War II Golden boomed, rapidly gaining population, size and economy. In 1959, the town nearly tripled in geographic size overnight when it annexed large properties to the south, including the new Magic Mountain theme park, one of the earliest entertainment attractions of its kind. A number of new subdivisions were built and public infrastructure was modernized, including new buildings for the senior high school, city hall, recreation center, library, museum and central fire and police stations. Also built were new downtown anchors, including department stores and grocery stores, several new church buildings, new county offices, and the Horizon Plan, which transformed the School of Mines.

The decline in the price of petroleum and near simultaneous failure of several downtown anchors placed the central business district into recession in the 1980s, and the downtown was revitalized again through various initiatives, including its second streetscaping project in 1992. In 1993 the old Golden High School building was converted into the American Mountaineering Center, making Golden a research and education hub for mountaineering. The Coors Brewery had become the largest single-site brewery in the world, its porcelain subsidiary among the foremost of its kind, and Golden became home to the National Renewable Energy Laboratory.

Today Golden has a population of over 18,000 people and is home to more people and businesses of national and international influence than ever before, yet maintains a small-town historic identity. A Golden mailing address may also represent one of several communities in unincorporated Jefferson County to the north and west of Golden, communities undergoing continual residential development of former farm, ranch and mining land and which possess a considerable population. 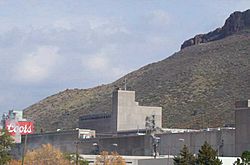 There were 7,394 households out of which 23.7% had children under the age of 18 living with them, 43.4% were married couples living together, 7.2% had a female householder with no husband present, 3.3% had a male householder with no wife present, and 46.1% were non-families. 31.6% of all households were made up of individuals and 3.2% had someone living alone who was 65 years of age or older. The average household size was 2.24 and the average family size was 2.8.

Golden is home to possibly the most museums per capita of any place in Colorado, including the Golden History Center, Astor House Hotel Museum, Clear Creek History Park, Rocky Mountain Quilt Museum, Colorado Railroad Museum, Colorado School of Mines Geology Museum, and the Bradford Washburn American Mountaineering Museum. There is also the Mother Cabrini Shrine. Golden is home to the Jefferson Symphony Orchestra, which performs seasonally at Bunker Auditorium in the Green Center at the Colorado School of Mines, and has performed continuously since 1953. The city is also home to the Foothills Art Center, an art exhibition venue housed in a historic church. Miners Alley Playhouse in downtown Golden, is an award-winning live theater which has performed there since 2001. The 150-year-old Buffalo Rose Bar and Grill is the longest surviving Colorado gold rush-era business and remains a popular music venue for touring rock and blues bands.

Golden has several annual events, which include E-Days of the Colorado School of Mines in April (since 1927), the Golden Music Festival at Clear Creek History Park, Independence Day fireworks shows sponsored the Golden Lions Club (since 1972), the largest event of the year is Buffalo Bill Days in late July (since 1946); the Golden Fine Arts Festival in August (since 1990), and Olde Golden Christmas (since 1972) in November to December.

Golden is also home to the Headquarters and Brewery currently in use by Coors Beer. Golden was where the Beer company had its start and it has kept its Headquarters in the city ever since its founding in 1873. The brewery offers tours to those wishing to see the brewery in action. It also is one of the leading employers in the Golden area with 900 employees working full-time in the brewery. The brewery is a major influence on the city's culture and celebrations.

All content from Kiddle encyclopedia articles (including the article images and facts) can be freely used under Attribution-ShareAlike license, unless stated otherwise. Cite this article:
Golden, Colorado Facts for Kids. Kiddle Encyclopedia.