Horan was born May 26, 1994 and grew up in Golden, Colorado near Denver. Although she attended Golden High School, she did not play soccer for the school. Instead, she played club soccer with the Colorado Rush. She first started playing for the Colorado Edge during the U-11 tryouts. In March, when Horan was 15 years old and was one of the youngest players on the United States under-17 women's national team, she scored 12 goals in nine games (a team best) leading up to the North American/Central American/Caribbean U-17 tournament in Costa Rica. During her sophomore year at Golden, she was named to the Parade Magazine High School All-American team although she didn't play high school soccer.

In 2012, Horan was named the top-ranked college prospect by ESPN. Although she had a scholarship to play for North Carolina, Horan bypassed her college career and signed with French club Paris Saint-Germain FC (PSG).

Horan played for the Colorado Rush in the W-League during the 2012 season. She played three games for the team, scoring two goals and taking 19 shots. 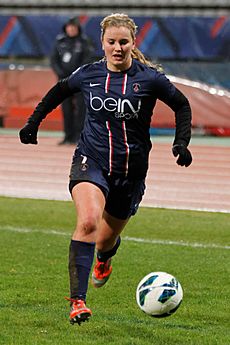 In July 2012, Horan signed a six-figure deal to play with the professional French club, Paris Saint-Germain FC (PSG). On January 4, 2016, Paris Saint-Germain announced Horan's contract had been terminated to allow her to return to the United States. She played her final game on December 5, 2015, a 5–0 win over FCF Juvisy. Horan scored the match's opening goal. Horan scored 46 goals in 58 appearances for PSG. 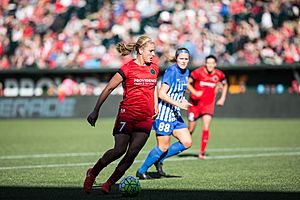 Horan with Portland Thorns in 2016

On January 13, 2016, Horan signed with the Portland Thorns FC of the NWSL.

Unlike her role at PSG, Horan for Portland plays in central midfield in a position similar to her national-team role. 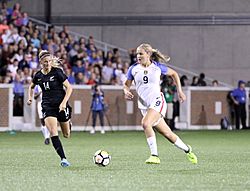 Horan (right) with the national team in 2017

In February 2013, at the age of eighteen, she was named to the senior team roster for the 2013 Algarve Cup. She earned her first cap for the senior team during a group stage match against China at the Algarve on March 8, 2013. Horan was called up to the senior roster near the end of 2015, and scored her first goal for the senior team during a 'Woman of the Match' performance against Trinidad & Tobago in December 2015. She is on the roster for the 2016 CONCACAF Women's Olympic Qualifying Championship and started the opening group stage match against Costa Rica in central midfield.

While Horan played successfully as a striker during her time at PSG, with 46 goals in 56 appearances, she played in central midfield after her return to the national team in 2016.

Horan was called up for the 2019 FIFA Women's World Cup, scoring her first World Cup goal in the opening game against Thailand on 11 June. On January 31, 2020, she scored her first career hat-trick against Panama in the 2020 CONCACAF Women's Olympic Qualifying Championship in addition to assisting goals scored by Lynn Williams and Tobin Heath.

All content from Kiddle encyclopedia articles (including the article images and facts) can be freely used under Attribution-ShareAlike license, unless stated otherwise. Cite this article:
Lindsey Horan Facts for Kids. Kiddle Encyclopedia.