Madison (formerly Norridgewock) is a town in Somerset County, Maine, United States. The population was 4,726 at the 2020 census.

The area was once territory of the Norridgewock Indians, a band of the Abenaki nation. Early visitors describe extensive fields cleared for cultivation. The tribe also fished the Kennebec River. French Jesuits established an early mission at the village, which was located at Old Point. But Father Sebastien Rale (or Rasle), appointed missionary in 1694, was suspected of abetting the tribe's raids on English settlements. Governor Joseph Dudley put a price on his head. British troops attacked the village in 1705 and again in 1722, but both times Father Rale escaped into the woods. But on August 23, 1724, during Father Rale's War, soldiers attacked the village unexpectedly, killing 26 warriors and wounding 14, with 150 survivors fleeing to Canada. Among the dead was Father Rale.

Settled by English colonists about 1773, the land would be surveyed in 1791. In 1775, Benedict Arnold and his troops would march through Norridgewock Plantation, as it was known, on their way to the ill-fated Battle of Quebec. The town had originally been settled under the name "Norridgewock Falls." This was later changed to "Bernardstown," after the major land owning family, the Bernards. It was then officially incorporated on March 7, 1804, the town was named after United States president James Madison. Farming was an early industry, with hay and cattle the principal products. The native rock is slate, and a quarry was established to extract it. Because of the region's abundant forests, lumbering developed as an industry, with four sawmills operated by water power on the Kennebec. Here the Norridgewock Falls drop 90 feet (27 m) over a mile, which attracted other manufacturers as well. In the 19th century, the small mill town had factories which produced carriages, window sash, window blinds, doors and coffins. 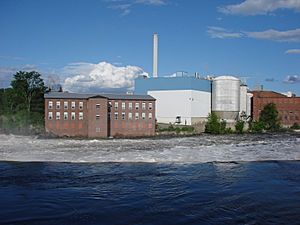 Looking across the Kennebec River at the Madison Paper Mill, Summer Solstice 2008

When the railroad was extended through Madison in 1875, larger mills were built. The first Madison Woolen Mill was constructed in 1881 near the bridge between Madison and Anson, with the firm's second mill built nearby in 1887. In 1890, the Manufacturing Investment Company built a sulfite mill, but it failed. It was taken over in 1899 by the Great Northern Paper Company, which rebuilt the plant to produce wood pulp and paper. Like many New England textile manufacturers, the town's woolen mills eventually went out of business, but the pulp and paper mill remains today as the Madison Paper Industries which will close by May 2016 due to low demand for supercalender paper and Canadian competition.

In 1901, Lakewood Summer Theatre opened in East Madison on the western side of Lake Wesserunsett. Since 1967 it has been the official summer theatre of Maine, and the oldest continually operating summer theatre in America. Actors who have performed at Lakewood include John Travolta, Carol Channing, and Phyllis Diller

Completed in 2007 is the largest structure by volume in Maine, the Backyard Farms greenhouse that covers 24 acres (9.7 ha).

There were 1,976 households, of which 27.7% had children under the age of 18 living with them, 49.1% were married couples living together, 9.9% had a female householder with no husband present, 5.3% had a male householder with no wife present, and 35.7% were non-families. 28.9% of all households were made up of individuals, and 13.5% had someone living alone who was 65 years of age or older. The average household size was 2.32 and the average family size was 2.82.

The Skowhegan School of Painting and Sculpture is an artists residency located in Madison, just outside of Skowhegan.

All content from Kiddle encyclopedia articles (including the article images and facts) can be freely used under Attribution-ShareAlike license, unless stated otherwise. Cite this article:
Madison, Maine Facts for Kids. Kiddle Encyclopedia.