The Lakewood Theater is a theater complex at 76 Theatre Road in Madison, Maine, on the shores of Lake Wesserunsett. Founded in 1898 but only properly developed in 1901, it is one of the oldest summer theaters in the United States. The theater was in the 1920s and 1930s one of the major off-Broadway stops, and now plays host to touring productions each summer. The main auditorium is located on a former 1882 religious camp meeting sanctuary that was extensively altered in 1925-26 to accommodate the theater. It was listed on the National Register of Historic Places in 1975.

The Lakewood Theater complex is set on the western shore of Lake Wesserunsett, off United States Route 201 in eastern Madison. The main theater building is a 2-1/2 story Colonial Revival wood frame structure with a gable roof. A two-story porch extends across much of the front, with square paneled posts and diamond-pattern balustrade. 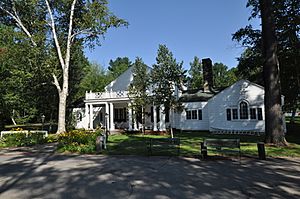 The property on which the theater is built was part of a larger resort area developed by owners of the area's trolley car network to draw people to use their facilities. This particular property was where in 1882 a religious camp meeting sanctuary was built, which forms the core of the theater building. In 1884 this building was converted into a skating rink, and in 1898 its use as a theater began. The theater's rise in prominence began in 1901, when Herbert Swett took over its management, and oversaw improvements to its physical plant over a 20-year tenure. By the mid-1920s, when the building achieved its present form, the theater was a major tryout location for Broadway shows. After World War II, these types of shows declined, and the theater has since then primarily shown touring productions. Numerous famous actors, including Vincent Price, Ethel Barrymore, and George M. Cohan have graced its stage.

Playwright John B. Hymer was known as the mayor of Lakewood and collabored with fellow playwright Samuel Shipman in Lakewood. He also built Colony House there in 1929. His son Warren Hymer stayed with him and went on to a career as a movie actor.

All content from Kiddle encyclopedia articles (including the article images and facts) can be freely used under Attribution-ShareAlike license, unless stated otherwise. Cite this article:
Lakewood Theater (Madison, Maine) Facts for Kids. Kiddle Encyclopedia.