Kids Encyclopedia Facts
For the nearby island in the Platte River, see Grand Island (Nebraska).

Grand Island is a city in and the county seat of Hall County, Nebraska, United States. The population was 48,520 at the 2010 census.

Grand Island is home to the Nebraska Law Enforcement Training Center (NLETC) which is the sole agency responsible for training law enforcement officers throughout the state, as well as the home of the Southern Power District serving southern Nebraska.

In 1857, 35 German settlers left Davenport, Iowa, and headed west to Nebraska to start a new settlement on an island known by French traders as La Grande Isle, which was formed by the Wood River and the Platte River. The settlers reached their destination on July 4, 1857, and by September had built housing using local timber. Over the next nine years, the settlers had to overcome many hardships, including blizzards and conflicts with Native Americans. 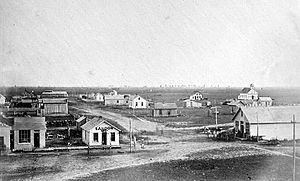 Surveyors from the Union Pacific Railroad laid out a town called Grand Island Station and many settlers living on Grand Island moved to the new town, located slightly inland from the island. In 1868 the railroad reached the area, bringing increased trade and business. By 1870, 1,057 people lived in the town and in 1872 the town was incorporated as Grand Island.

In about 1890, sugar beets were introduced as a crop in Nebraska. The first sugar beet processing factory in the United States was built in the southwest part of Grand Island.

On June 3, 1980, Grand Island was hit by a massive supercell storm. Through the course of the evening, the city was ravaged by seven tornadoes, the worst of which was rated F4 on the Fujita Scale. The hardest hit area of town was the South Locust business district. There were five deaths as a result of the tornadoes.

Tornado Hill is a local landmark created as a direct result of the tornadoes. Debris that could not be recycled was burnt near Fonner Park and buried within Ryder Park, on the west end of town. The base of the hill was a hole 6–8 feet deep and nearly 200 feet across, and the hill is 40 feet high. It is used for sledding in this naturally flat area.

A book, Night of the Twisters, by Ivy Ruckman, and movie were based on this event.

There were 18,326 households of which 35.4% had children under the age of 18 living with them, 47.5% were married couples living together, 12.0% had a female householder with no husband present, 5.2% had a male householder with no wife present, and 35.4% were non-families. 29.1% of all households were made up of individuals and 11.2% had someone living alone who was 65 years of age or older. The average household size was 2.59 and the average family size was 3.20.

In 2010 Grand Island became the home of the Nebraska State Fair.

Interstate 80 is located four miles south of the city. US Highway 281 is the main north-south route in the city, running through the city's west edge south to Hastings, Nebraska, and north to O'Neill, Nebraska.

All content from Kiddle encyclopedia articles (including the article images and facts) can be freely used under Attribution-ShareAlike license, unless stated otherwise. Cite this article:
Grand Island, Nebraska Facts for Kids. Kiddle Encyclopedia.