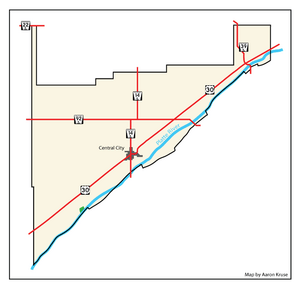 A map of Merrick County, Nebraska

Merrick County is a county in the U.S. state of Nebraska. As of the 2010 United States Census, the population was 7,845. Its county seat is Central City.

Merrick County was formed in 1858 and organized in 1864. It was named for Elvira Merrick, the maiden name of the wife of territorial legislator Henry W. DePuy, who introduced the bill that created the county.

When first formed, the county was bounded on the south by the Platte River, and by straight lines on the north, east, and west. It thus included 180 square miles (470 km2) of the Pawnee Reservation, established one year before the county. In 1873, the state legislature removed these reservation lands from the county, leaving it with a jagged northern border from which narrow panhandles extended northward from the northeast and northwest corners. In 1897, the Pawnee Reservation became Nance County.

All content from Kiddle encyclopedia articles (including the article images and facts) can be freely used under Attribution-ShareAlike license, unless stated otherwise. Cite this article:
Merrick County, Nebraska Facts for Kids. Kiddle Encyclopedia.