Calais is a city in Washington County, Maine, United States. As of the 2010 census, it had a population of 3,123. The city has three Canada–US border crossings (also known as ports of entry) over the St. Croix River connecting to St. Stephen, New Brunswick, Canada.

Calais has been a city of commerce and is recognized as the primary shopping center of eastern Washington County and of Charlotte County, New Brunswick. Retail, service, and construction businesses are the primary components of the Calais economy.

This area was occupied for thousands of years by indigenous peoples. The historic Passamaquoddy, an Algonquian-speaking people of the Wabanaki Confederacy, was predominant in this area at the time of European encounter and settlement.

The St. Croix River and its area were first explored by the French Samuel de Champlain when he and his men spent a winter on St. Croix Island in 1604. The first permanent settler was Daniel Hill of Jonesboro, who arrived in 1779 during the American Revolutionary War, when this was still part of Massachusetts. With other settlers, he built the first sawmill in 1782. On June 27, 1789, the Massachusetts General Court sold the township to Waterman Thomas for 19¢ an acre (approx. $2.30 an acre in 2006 dollars). Early occupations in the settlement included farming, hunting and ship building.

On June 16, 1809, Plantation Number 5 PS was incorporated as Calais after Calais, France, in honor of French assistance during the American Revolution. The river provided the mill town with water power for industry, which included sawmills, clapboard and shingle mills, two planing mills, a saw factory, two axe factories and four grain mills. There were foundries, machine shops, granite works, shoe factories and a tannery. Other businesses produced bricks, bedsteads, brooms, carriages and plaster.

The relationship between Calais and the neighboring Canadian town of St. Stephen has been remarkably close, over a period of many years. As evidence of the longtime friendship between the towns, during the War of 1812, the British military provided St. Stephen with a large supply of gunpowder for protection against the enemy Americans in Calais, but St. Stephen's town elders gave the gunpowder to Calais for its Fourth of July celebrations.

Calais is the home of the first railroad built in the state of Maine, the Calais Railroad, incorporated by the state legislature on February 17, 1832. It was built to transport lumber from a mill on the St. Croix River opposite Milltown, New Brunswick, 2 miles (3 km) to the tidewater at Calais in 1835. In 1849, the name was changed to the Calais & Baring Railroad, and the line was extended 4 miles (6 km) farther to Baring. In 1870, it became part of the St. Croix & Penobscot Railroad.

Calais was incorporated as a city on August 24, 1850. On July 18, 1864, Confederate agents crossed the border from New Brunswick and attempted to rob a bank in Calais.

The Calais Free Library was designed by noted Boston architect Arthur H. Vinal and opened on July 4, 1893. The Romanesque Revival building was listed on the National Register of Historic Places in 2001.

Calais viewed from St. Stephen across the St. Croix River

Recently, the City of Calais acquired Devil's Head. The site comprises 318 acres (1.29 km2) of land, one mile (1.6 km) of frontage on the St. Croix River estuary, and 6/10 of a mile of frontage on U.S. Route 1. Significant features on the property include a 340-foot (100 m) high granite headland towering over the estuary, a low-tide sand and boulder beach, upland forest, and abundant wildlife. Trail construction was completed in 2003.

There were 1,403 households of which 25.3% had children under the age of 18 living with them, 38.8% were married couples living together, 11.2% had a female householder with no husband present, 4.9% had a male householder with no wife present, and 45.0% were non-families. 39.9% of all households were made up of individuals and 20.3% had someone living alone who was 65 years of age or older. The average household size was 2.12 and the average family size was 2.80. 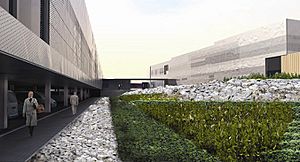 The Ferry Point International Bridge and the Milltown International Bridge connect Calais to St. Stephen, New Brunswick, Canada. Construction began in 2008 on a third bridge and Port of entry (POE) to connect the two communities. Referred to as the International Avenue Bridge, this bridge and POE opened on November 16, 2009, and serves commercial, cargo, trucking, passenger vehicles, campers, RVs, and buses. However, both the Ferry Point and Milltown crossings remain in use for passenger vehicles and pedestrians.

The new inspection facility alleviates traffic congestion from downtown Calais and the neighboring towns in Canada. It is equipped with state-of-the-art security equipment that allows for efficient processing of both commercial and passenger vehicles. The new facility is occupied by U.S. Customs and Border Protection (CBP), the U.S. Food and Drug Administration (FDA) and U.S. General Services Administration (GSA). This facility was built as part of GSA's high-performance green building program and has received the Leadership in Energy and Environmental Design (LEED) Gold certification for comprehensive use of sustainable design and technology. Recycled, reused, and local materials were used during the construction. The facility conserves energy by bringing natural light into every occupied space, and conserves water by using low-flow fixtures that consumes 40 percent less water than traditional plumbing. The Calais port of entry, designed by Robert Siegel Architects, provides six lanes of non-commercial inspection and three lanes of commercial inspection.

All content from Kiddle encyclopedia articles (including the article images and facts) can be freely used under Attribution-ShareAlike license, unless stated otherwise. Cite this article:
Calais, Maine Facts for Kids. Kiddle Encyclopedia.