Sisters is a city in Deschutes County, Oregon, United States. It is part of the Bend, Oregon Metropolitan Statistical Area. The population was 2,038 at the 2010 census.

The community takes its name from the nearby Three Sisters mountains.

According to the United States Census Bureau, the city has a total area of 1.87 square miles (4.84 km2), all of it land.

The Santiam Highway (U.S. Route 20) and the McKenzie Highway (Oregon Route 126) merge briefly to form Cascade Avenue, the main thoroughfare through downtown Sisters. On Cascade Avenue, there is a lot of pedestrian traffic and many specialty stores and galleries. East of Sisters the two highways split, with 126 heading to Redmond and 20 going to Bend. West of Sisters, the road splits once more, with the McKenzie Highway becoming Oregon Route 242 and running west over the McKenzie Pass (a summertime-only scenic route over the Cascades.) The Santiam Highway proceeds over the Santiam Pass.

This region experiences warm (but not hot) and dry summers, with no average monthly temperatures above 71.6 °F (22.0 °C). According to the Köppen Climate Classification system, Sisters has a warm-summer Mediterranean climate, abbreviated "Csb" on climate maps.

There were 847 households, of which 32.3% had children under the age of 18 living with them, 48.1% were married couples living together, 13.7% had a female householder with no husband present, 4.0% had a male householder with no wife present, and 34.2% were non-families. 29.0% of all households were made up of individuals, and 12.2% had someone living alone who was 65 years of age or older. The average household size was 2.39 and the average family size was 2.92. 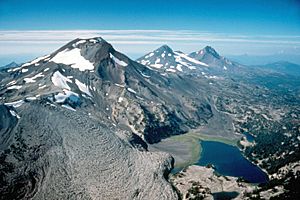 Sisters is the headquarters of the Sisters District of the Deschutes National Forest. The Sisters Ranger District Office is located at Pine Street and Highway 20. Hiking, biking and horse riding trails go from the city limits into the Three Sisters Wilderness. Sisters Trail Alliance builds and maintains hiking, biking and equestrian trails near the city.

The Sisters area is also home to several mountain biking trails, including the Peterson Ridge Trail and Suttle Lake trails.

Hoodoo ski resort and many snow parks are nearby.

Camp Tamarack is nearby.

The Sisters area is served by Sisters School District, which is responsible for the education of approximately 1,300 students at four schools:

All content from Kiddle encyclopedia articles (including the article images and facts) can be freely used under Attribution-ShareAlike license, unless stated otherwise. Cite this article:
Sisters, Oregon Facts for Kids. Kiddle Encyclopedia.