Kids Encyclopedia Facts
Not to be confused with the adjoining census-designated place of Garden, Utah.

Garden City is a town in northwestern Rich County, Utah, United States. The population was 562 at the 2010 census. Garden City sits on the shores of Bear Lake and is a popular summer resort destination town, thus is nicknamed the "Caribbean of the Rockies."

Garden City was first settled in 1877 and an LDS branch was formed there at that time. Two years later the town had grown into a ward. In 1979, it merged with the neighboring town of Pickelville.

in 1903 Horatio Nelson Jackson and Sewall Crocker stopped in Garden City on the first automobile journey across the United States.

According to the United States Census Bureau, the town has a total area of 4.5 square miles (11.7 km²), all of it land. 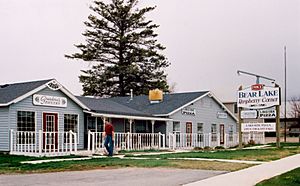 There were 131 households, out of which 26.7% had children under the age of 18 living with them, 69.5% were married couples living together, 4.6% had a female householder with no husband present, and 23.7% were non-families. 19.1% of all households were made up of individuals, and 8.4% had someone living alone who was 65 years of age or older. The average household size was 2.69 and the average family size was 3.10. There is a large amount of vacation homes, the majority of which are rented out to large groups during the vacation season.

All content from Kiddle encyclopedia articles (including the article images and facts) can be freely used under Attribution-ShareAlike license, unless stated otherwise. Cite this article:
Garden City, Utah Facts for Kids. Kiddle Encyclopedia.