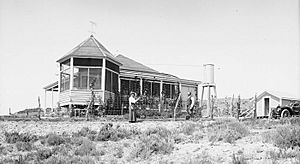 Rich County is a county in the U.S. state of Utah. As of the 2010 United States Census, the population was 2,264, making it the third-least populous county in Utah. Its county seat is Randolph, and the largest town is Garden City. The county was created in 1864. It was named for an early LDS apostle, Charles C. Rich.

Rich County was believed to have first been visited by European descendent explorers in 1811, when trapper Joseph Miller discovered the Bear River. In 1827, the first annual rendezvous of trappers occurred on the south shore of Bear Lake, a tradition which is still marked today. The site is also preserved as part of Bear Lake State Park. The first settlement within the county's present boundary was Round Valley in 1863; located southwest of Laketown (settled 1864), it is now a ghost town. Randolph was settled in 1870. Originally created as Richland County in 1864, the name was shortened to Rich in 1868 by the 17th Utah Territorial Legislature. The boundary as originally defined legitimately extended beyond Utah into southwestern Wyoming, but also contained populated territory within what was actually Idaho Territory. The 1870 census for Rich County, Utah Territory enumerates a total of 1,672 residents in the eight Idaho communities of Bennington, Bloomington, Fish Haven, Liberty, Montpelier, Ovid, Paris and St. Charles. Utah Territory adjusted the county's boundary in 1872 and Idaho Territory took the eight aforementioned communities and others in the Bear Lake Valley to form Bear Lake County on January 5, 1875.

The Bear River Valley is created by the Bear River and consists of the east-central portion of the county. The towns of Randolph and Woodruff lie in this farming-oriented valley. Its high elevation makes this region one of the coldest areas in the state. Woodruff has a record low of −50 °F (−46 °C) and temperatures rarely exceed 90 °F (32 °C) during the summer. Snow is heavy in late autumn, winter, and early spring and remains on the ground for the entire winter.

Further to the north lies the southern half of Bear Lake Valley, which contains Bear Lake. This lake is famous for its deep blue water, beaches, and surrounding mountains. The Bear River Mountains lie along the western edge of the county, and Logan Canyon opens up to the west of Garden City, which is a quaint tourist town that lies on the western edge of Bear Lake. Laketown lies at the southern edge of the lake. Three sections of the coastline are protected by Bear Lake State Park. The eastern slopes of the Bear River Range is an increasingly popular location for cabins.

As of the 2010 census, the largest self reported ancestry groups in Rich County were:

U.S. Route 89 descends from the Bear River Mountains through Logan Canyon and turns north at Garden City along the Bear Lake shoreline. State Route 30 heads south from Garden City through Laketown and climbs east through the mountains to the Wyoming border. State Route 16 heads south from Sage Creek Junction through Randolph and Woodruff before entering Wyoming northwest of Evanston. State Route 39 heads west into the Wasatch Range from Woodruff on its way to Huntsville and eventually Ogden. However, this highway is closed through the mountains during the winter months as heavy snow blocks the road. Interstate 80 lies in Summit County very near the Rich County border, but is only accessible from Rich County through Wyoming. 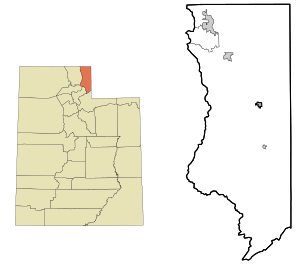 As of the 2010 census, the largest self reported ancestry groups in Rich County were:

All content from Kiddle encyclopedia articles (including the article images and facts) can be freely used under Attribution-ShareAlike license, unless stated otherwise. Cite this article:
Rich County, Utah Facts for Kids. Kiddle Encyclopedia.