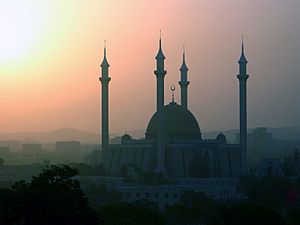 Haze is a problem with the air quality in which smoke covers the sky, making it hard for people to breathe. Some people fall sick as well due to the polluted air.

Seen from afar (e.g. an approaching airplane) and depending on the direction of view with respect to the Sun, haze may appear brownish or bluish, while mist tends to be bluish grey. Whereas haze often is thought of as a phenomenon of dry air, mist formation is a phenomenon of humid air. However, haze particles may act as condensation nuclei for the subsequent formation of mist droplets; such forms of haze are known as "wet haze."

In meteorological literature, the word haze is generally used to denote visibility-reducing aerosols of the wet type. Such aerosols commonly arise from complex chemical reactions that occur as sulfur dioxide gases emitted during combustion are converted into small droplets of sulfuric acid. The reactions are enhanced in the presence of sunlight, high relative humidity, and stagnant air flow. A small component of wet-haze aerosols appear to be derived from compounds released by trees, such as terpenes. For all these reasons, wet haze tends to be primarily a warm-season phenomenon. Large areas of haze covering many thousands of kilometers may be produced under favorable conditions each summer.

All content from Kiddle encyclopedia articles (including the article images and facts) can be freely used under Attribution-ShareAlike license, unless stated otherwise. Cite this article:
Haze Facts for Kids. Kiddle Encyclopedia.