Kids Encyclopedia Facts
This page is about the Wyoming county. For the Utah county, see Uintah County, Utah. 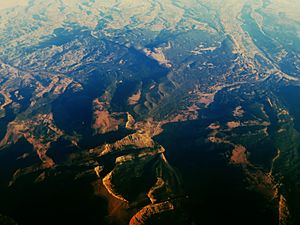 Foothills of the Uinta Mountains south of Evanston, Wyoming

Uinta County ( yoo-IN-tə) is a county in the U.S. state of Wyoming. As of the 2010 United States Census, the population was 21,118. Its county seat is Evanston. Its south and west boundary lines abut the Utah state line.

Uinta County was created on December 1, 1869 by the legislature of the Wyoming Territory with its temporary seat located at Fort Bridger. Originally, it ran along the entire western border of Wyoming, including Yellowstone National Park. The county was named for Utah's Uinta Mountains, which are visible from many places in the county. The county was given its present boundaries in 1911 when Lincoln County was carved out of the northern part of Uinta County.

The 161 km wide western North American Fold and thrust belt extends from Alaska to Mexico, forming several northerly trending thrust faults in southwest Wyoming, including the Crawford, Absaroka and Hogsback (Darby), which formed from the Late Jurassic through the early Eocene. The Painter Reservoir Field was discovered in 1977 from the 407 m thick Nuggest Sandstone which forms an anticline structural trap in the hanging wall of the Absaroka thrust plate, at a depth of about 3 km.

As of 2016 the largest self-reported ancestry groups in Uinta County, Wyoming are:

As of 2015 the largest self-reported ancestry groups in Uinta County, Wyoming are:

All content from Kiddle encyclopedia articles (including the article images and facts) can be freely used under Attribution-ShareAlike license, unless stated otherwise. Cite this article:
Uinta County, Wyoming Facts for Kids. Kiddle Encyclopedia.