Browns Valley is a city in Traverse County, Minnesota, United States, adjacent to the South Dakota border. The population was 589 at the 2010 census.

Browns Valley lies along the Little Minnesota River between the northern end of Big Stone Lake and the southern end of Lake Traverse, which is separated from the Little Minnesota River by a low and narrow continental divide that skirts the northern edge of town. The city, both lakes, and the river lie in the Traverse Gap, the bed of ancient, south-flowing Glacial River Warren, the outlet to Glacial Lake Agassiz which, when drained, became the valley of the north-flowing Red River of the North.

Browns Valley was first settled in 1867 by Joseph R. Brown, and named for him. The settlement was platted in 1878. A post office was established in the community in 1867 under the name Lake Traverse. The post office was renamed Browns Valley in 1872. Two properties in the city are listed on the National Register of Historic Places: the 1864 Fort Wadsworth Agency and Scout Headquarters Building within Sam Brown Memorial State Wayside and the 1916 Browns Valley Carnegie Library.

According to the United States Census Bureau, the city has a total area of 0.79 square miles (2.05 km2), all of it land. Browns Valley is rested in an old glacier path.

The Browns Valley weather station records some of Minnesota's highest summer temperatures; on July 31, 2007, a high of 107 °F (42 °C) was registered.

Browns Valley Lies in the center of Traverse Gap, a valley and ancient riverbed. This valley is also home to a continental divide. The divide is the southernmost point of the Northern Divide between the watersheds of the Arctic and the Atlantic Oceans. The area is also home to Browns Valley Man, the oldest human remains found in Minnesota. The remains were found in Traverse Gap and carbon dated to about 9,000 years ago.

Minnesota Highways 27 and 28 are two of the main routes in the community.

There were 247 households of which 23.5% had children under the age of 18 living with them, 38.5% were married couples living together, 13.0% had a female householder with no husband present, 5.7% had a male householder with no wife present, and 42.9% were non-families. 40.5% of all households were made up of individuals and 24.3% had someone living alone who was 65 years of age or older. The average household size was 2.23 and the average family size was 2.97.

There were 285 households out of which 26.3% had children under the age of 18 living with them, 45.3% were married couples living together, 9.5% had a female householder with no husband present, and 40.0% were non-families. 36.5% of all households were made up of individuals and 21.4% had someone living alone who was 65 years of age or older. The average household size was 2.29 and the average family size was 3.02. 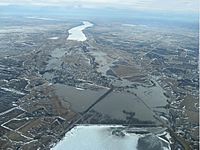 Traverse Gap from ice-covered Lake Traverse at the bottom of frame, south to Big Stone Lake (top). The Little Minnesota River is flooding the valley floor and Browns Valley (center).

In March 2007, Browns Valley was flooded from the north and west by the Little Minnesota River. 100 people had to be evacuated from their homes, a significant percentage of the town's population. The damage was significant enough to warrant a visit from Governor Tim Pawlenty and Congressman Collin Peterson.

All content from Kiddle encyclopedia articles (including the article images and facts) can be freely used under Attribution-ShareAlike license, unless stated otherwise. Cite this article:
Browns Valley, Minnesota Facts for Kids. Kiddle Encyclopedia.