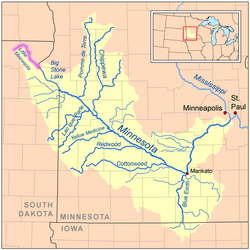 The Little Minnesota rises from the Coteau des Prairies in Marshall County, South Dakota near the town of Veblen and flows generally southeastward through Roberts County, where it collects two small tributaries, Standfast Creek and the Jorgenson River. Near the Minnesota state line, it passes within a mile of Lake Traverse, part of the Hudson Bay watershed, from which it is separated by a low continental divide. The river enters Minnesota at the town of Browns Valley and shortly enters Big Stone Lake, which is drained by the Minnesota River. The region between Lake Traverse and Big Stone Lake is known as the Traverse Gap; it was formed by Glacial River Warren which drained Lake Agassiz (the lakebed of which is now the Red River Valley) toward the end of the last of the ice ages.

All content from Kiddle encyclopedia articles (including the article images and facts) can be freely used under Attribution-ShareAlike license, unless stated otherwise. Cite this article:
Little Minnesota River Facts for Kids. Kiddle Encyclopedia.