Falls of the Ohio State Park facts for kids

Falls of the Ohio State Park is a state park in the U.S. state of Indiana. It is located on the banks of the Ohio River at Clarksville, Indiana, across from Louisville, Kentucky. The park is part of the Falls of the Ohio National Wildlife Conservation Area. The exposed fossil beds of the Jeffersonville Limestone dated from the Devonian period are the main feature of the park. The Falls was the site where Lewis & Clark met for the Lewis and Clark Expedition. 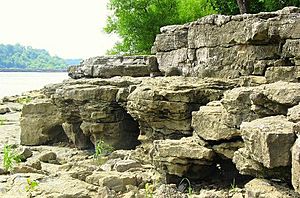 Fossil formations (Devonian Jeffersonville Limestone) found along the shores of the Ohio River. 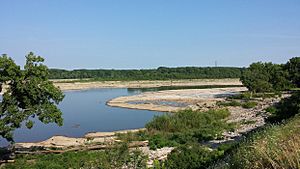 View of the fossil bed from the overlook

The park includes an interpretive center open to the public. In 1990, the Indiana state government hired Terry Chase, a well-established exhibit developer, to design the center's displays. Construction began in September 1992, costing $4.9 million with a total area of 16,000 sq ft (1,500 m2). The center functions as a museum with exhibits that concentrate on the natural history related to findings in the nearby fossil beds as well as the human history of the Louisville area, covering pre-settlement, early settlement, and the history of Louisville and southern Indiana through the 20th century. 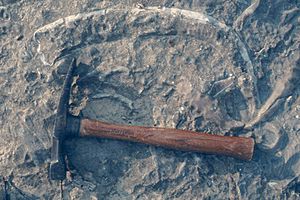 Large rugose coral (above hammer) at the Falls of the Ohio

Unlike at other Indiana state parks, annual entrance permits do not allow unlimited free access (rather, only five people per pass per visit) to the interpretive center, as fees are still needed to reimburse the town of Clarksville for building the center.

The Woodland Loop Trail features ten stainless steel markers denoting the plant life of the trails, thanks to an Eagle Scout project.

Strange wildlife has a habit of showing up in the park. Living alligators and crocodiles have been seen in the park, and in August 2006 a fisherman hooked a dead octopus. Zachary Treitz, a 21-year-old Louisville college student, admitted he had put the octopus there after purchasing it dead from a local seafood shop for a film project.

All content from Kiddle encyclopedia articles (including the article images and facts) can be freely used under Attribution-ShareAlike license, unless stated otherwise. Cite this article:
Falls of the Ohio State Park Facts for Kids. Kiddle Encyclopedia.