Chamberlain (Lakota: makȟáthipi; "earth dwelling") is a city in Brule County, South Dakota, United States. It is located on the eastern bank of the Missouri River, at the dammed section of the Lake Francis Case, close to where it is crossed by Interstate 90.

The population of Chamberlain was 2,387 at the 2010 census. It is the county seat of Brule County.

Chamberlain is home to the South Dakota Hall of Fame. It is the site of St. Joseph's Indian School, a Native American residential school established in 1927 and operated by the Catholic order Priests of the Sacred Heart. A 50-foot (15 m) sculpture of a Native American woman, entitled Dignity, was installed on a bluff overlooking the Missouri River outside the city. 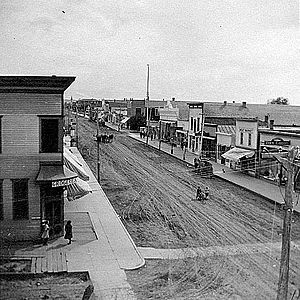 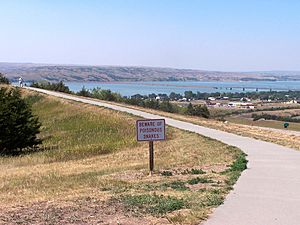 Chamberlain and the Missouri River

Chamberlain was laid out by European Americans in the early 1880s along the upper Missouri River. Its development was stimulated by construction of railroads through the area. The town was named after Selah Chamberlain, a railroad director of the Chicago, Milwaukee and St. Paul Railway.

There were 1,040 households, of which 28.1% had children under the age of 18 living with them, 41.1% were married couples living together, 12.9% had a female householder with no husband present, 2.7% had a male householder with no wife present, and 43.4% were non-families. 36.9% of all households were made up of individuals, and 15% had someone living alone who was 65 years of age or older. The average household size was 2.17 and the average family size was 2.87.

It is located in the Chamberlain School District.

St. Joseph's Indian School is in the community.

Chamberlain is served by the Chamberlain Municipal Airport, as well as the following three highways:

All content from Kiddle encyclopedia articles (including the article images and facts) can be freely used under Attribution-ShareAlike license, unless stated otherwise. Cite this article:
Chamberlain, South Dakota Facts for Kids. Kiddle Encyclopedia.