The annual official and historic celebrations (Patriotic Exercises) were established in 1785 by Rev. Henry Wight of the First Congregational Church and veteran of the Revolutionary War, and later by Rev. Wight as the Parade, and continue today, organized by the Bristol Fourth of July Committee. The festivities officially start on June 14, Flag Day, beginning a period of outdoor concerts, soap-box races and a firefighters' muster at Independence Park. The celebration climaxes on July 4 with the oldest annual parade in the United States, "The Military, Civic and Firemen's Parade", an event that draws over 200,000 people from Rhode Island and around the world. These elaborate celebrations give Bristol its nickname, "America's most patriotic town". In 1785 the Bristol Fourth of July Celebration (beginning as the Patriotic Exercises) was founded and the Fourth of July has been celebrated every year in Bristol since that date, although the parade itself was canceled several times.

Buddy Cianci and the parade 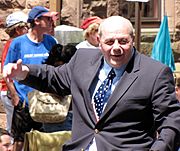 Buddy Cianci, Providence's longest-serving mayor, had a long and controversial history with the Bristol parade. In the 1970s, parade rules stipulated that only elected federal, state, and Bristol town officials were invited to participate; mayors of Providence were not invited. In spite of this, Providence mayor Buddy Cianci marched in the parade every year after his 1975 election, in violation of the rules, until parade organizers sent a letter censuring him after the 1979 parade. The Bristol Town Council explicitly voted to ban Cianci from the 1980 parade, a year in which Cianci was running for governor against J. Joseph Garrahy, who, as sitting governor, was welcome to march. The Bristol police chief vowed to arrest anyone who caused a disturbance. A record 300,000 spectators showed up for the 1980 parade, waiting to see what would happen. In the end, when Cianci's helicopter touched down at Colt High School, officials backed down in the face of overwhelming crowd support for Cianci; he received bigger cheers than any other guest that day.

In 1984, after pleading "no contest" to a charge of assault, Cianci skipped the parade; a clown dressed in a prison uniform, carrying a ball and chain, mocked him in his absence. In 1991, Cianci caused some controversy by marching in front of the parade marshal, which prompted the parade chairman to comment, "Cianci is rude and he doesn't deserve to be invited back." In 1997 and 1998, Cianci marched with a "small army" of police, including police rescue boats on trailers, a bicycle patrol, and police officers squirting spectators with water rifles. This proved too much for the parade subcommittee, who unanimously dis-invited Cianci from the 1999 parade. Cianci skipped 1999, but returned in 2000 to shouting and cheers, despite having been indicted this time on federal corruption charges. Cianci's last appearance as sitting mayor was in 2002, after his conviction. Instead of riding his usual horse, Cianci walked this time, and he was frequently stopped by fans along the route to take photos and to shake his hand.

In 2003, new Providence Mayor David Cicilline marched in the parade, accompanied by a more modest contingent than his predecessor.

The Rhode Island Tea-Party Association applied to enter the parade with a float featuring a representation of the British ship Beaver, which was ransacked by colonists dressed as Native Americans in 1773 at the Boston Tea Party. Staffing the float was Helen Glover, a radio personality from Providence, RI–based WHJJ 920 AM.

The Bristol Fourth of July Committee ejected the Rhode Island Tea-Party Association float from the 2009 parade and permanently banned them from all future parades for distributing pocket copies of the Declaration of Independence, the U.S. Constitution and Bill of Rights along the parade route. Such handouts are prohibited at the Parade on the grounds that people (especially children) running up to floats to get them pose a danger.

Attendance at the 2014 parade was reportedly "much lighter than usual" due to bad weather from Tropical Storm Arthur. The parade was ended abruptly at 1 p.m. with a sudden thunderstorm. Marchers included Rhode Island's congressional delegation at the front of the line, including Senators Jack Reed and Sheldon Whitehouse and Reps. Jim Langevin and David Cicilline. Former Providence mayor Buddy Cianci and Gubernatorial candidate Gina Raimondo also attended. 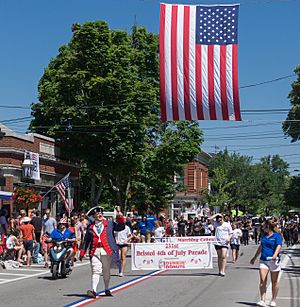 The 2020 parade was held in a reduced format due to the 2020 coronavirus pandemic. Parade marchers wore masks and mostly rode automobiles, instead of waking on foot. Spectators consisted of small groups of dozens, rather than the usual throngs of thousands. The "Longest Traveled Award" was not given, as organizers wanted to keep the celebration local in scale. 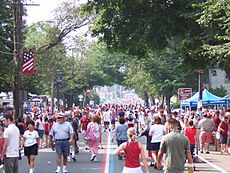 Crowded street scene prior to the parade in 2007. The town's unique red, white, and blue center line is also visible.

All content from Kiddle encyclopedia articles (including the article images and facts) can be freely used under Attribution-ShareAlike license, unless stated otherwise. Cite this article:
Bristol Fourth of July Parade Facts for Kids. Kiddle Encyclopedia.