Tuckerton was incorporated as a borough by an act of the New Jersey Legislature on February 18, 1901, from portions of Little Egg Harbor Township.

Tuckerton is home to the Tuckerton Seaport, a working maritime museum and village. 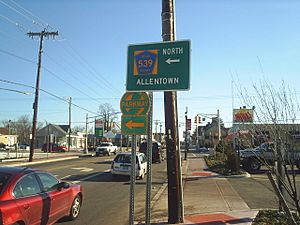 The area that is now Tuckerton was settled in 1698. Some of the early settlers were Andrews, Falkinburgs, Shourds, Ongs, Willets and Osborns. Edward Andrews settled on the east side of the Pohatcong Creek; his brother, Mordecai Andrews settled on the west side of the same creek. Edward, tired of going to Mount Holly Township with his grain, constructed a cedar log grist mill on the site of a dam built by beavers at the mouth of what is known as Tuckerton Creek. He built the grist mill in 1704, and it still stands to this day.

Tuckerton became a Port of Entry of the United States, but not the third port as is commonly believed, with Ebenezer Tucker appointed Collector, his commission bearing the date March 21, 1791, signed by George Washington and Thomas Jefferson. It was six years later that Tuckerton became a post town with Reuben Tucker as its first postmaster.

Former names of the town included "Andrew Mills", "Middle-of-the-Shore", "Clamtown", "Quakertown", and "Fishtown". In March 1789, Ebenezer Tucker hosted a feast at the then-named Clamtown for the residents at which time they officially changed the name to Tuckerton.

In 1816, Isaac Jenkins established the first stage line between Tuckerton and Philadelphia, making one trip a week, each trip taking two days travel each way. John D. Thompson bought the line in 1828 and ran the stages each way in a day and carried the mail. The stages and vessels were the only public conveyances to the cities until the Tuckerton Railroad was built in 1871.

What was probably New Jersey's first summer resort was on Tucker's Island off shore from Little Egg Harbor. The island sported boarding houses, private cottages, and a school. In 1848 a Lighthouse was erected there, with Eben Rider as its first light keeper. In 1869 the Little Egg Harbor Lifesaving's Station was constructed there. Also known as Sea Haven, the island contained two hotels. The island was wiped away in a storm, including its lighthouse, which fell into the sea. At the Tuckerton Seaport Museum a re-created lighthouse has been built as well as other re-created buildings that were on Tuckers Island. In the lighthouse there are several wall-mounted pictures showing the instant that the original lighthouse fell into the sea. The original island remains under water.

The area surrounding present-day Tuckerton was part of Burlington County until 1891 when it joined with Ocean County. Tuckerton was established in March 1901. with its first Mayor being Frank R. Austin.

The climate in this area is characterized by hot, humid summers and generally mild to cool winters. According to the Köppen Climate Classification system, Tuckerton has a humid subtropical climate, abbreviated "Cfa" on climate maps.

The Tuckerton Seaport, which is located in the center of town on Main Street, is a working maritime museum and village, which features several re-created historic buildings and has been a major attraction since its May 2000 opening.

Along Main Street in Tuckerton are several shops and stores. South of County Route 539, Main Street is bounded by Lake Pohatcong, which features a duck decoy-shaped billboard advertising the annual Ocean County Decoy and Gunning Show held in September at nearby Tip Seaman Park that began in 1982 and draws as many as 20,000 visitors. During the Holidays, the duck is replaced with a Christmas tree. In 1995, a boardwalk was installed along the side of the road overhanging the lake. 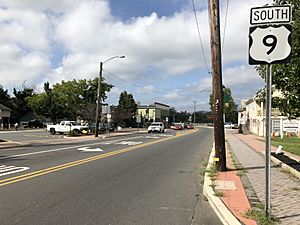 U.S. Route 9 passes through the northern part of the town and connects with the southern end of CR 539.

The Garden State Parkway is accessible via Route 539 (Exit 58 in Little Egg Harbor) and US 9 (Exit 50 in Bass River).

Students in public school for pre-kindergarten through sixth grade are served by the Tuckerton School District at Tuckerton Elementary School. As of the 2017–18 school year, the district, comprised of one school, had an enrollment of 280 students and 30.0 classroom teachers (on an FTE basis), for a student–teacher ratio of 9.3:1.

Public school students in seventh through twelfth grades attend the schools of the Pinelands Regional School District, which also serves students from Bass River Township, Eagleswood Township and Little Egg Harbor Township. Schools in the district (with 2017-18 enrollment data from the National Center for Education Statistics) are Pinelands Regional Junior High School with 802 students in grades 7-9 and Pinelands Regional High School with 815 students in grades 10–12. The district's board of education is comprised of nine members directly elected by the residents of the constituent municipalities to three-year terms on a staggered basis, with three seats up for election each year. Seats on the high school district's board of education are allocated based on the population of the constituent municipalities, with one seat allocated to Tuckerton.

People who were born in, residents of, or otherwise closely associated with Tuckerton include:

All content from Kiddle encyclopedia articles (including the article images and facts) can be freely used under Attribution-ShareAlike license, unless stated otherwise. Cite this article:
Tuckerton, New Jersey Facts for Kids. Kiddle Encyclopedia.